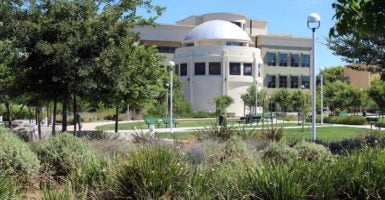 The head of California’s community college system, the country’s largest, has joined other education leaders in the state by declaring that he will resist any effort by the federal government to deport illegal immigrants within his student body.

Eloy Ortiz Oakley is chancellor of California Community Colleges, a network of some 113 campuses and the largest unified education system in the country with about 2 million students.

In a statement of principles released Monday evening, Oakley joined the University of California and California State University in declaring that he would do everything legally possible to obstruct deportation efforts by the incoming Trump administration.

While Oakley didn’t pledge to break any laws, he did say the school would accept any student regardless of immigration status, and would refuse to turn over student information to the federal government unless ordered to do so by a warrant or subpoena.

Oakley also said the school would also actively resist any federal attempt to create a registry of students based on a list of characteristics that includes national origin.

Oakley was blunt in saying that he opposed any enforcement of U.S. immigration laws for students who arrived in the U.S. illegally as minors.

“It is vital that these students, who were brought to this country as children, have the ability to learn without fear of being deported,” Oakley said. “The California community colleges stand with these students because they represent some of the best qualities that our state and nation have to offer.”

Thousands of students around the country have protested with demands that universities declare themselves “sanctuary campuses” dedicated to protecting illegal immigrants from deportation.

Several colleges have answered the call, but by far the most important have been the three major college networks in California. Due to their immense size and their presence in California (which has a high illegal immigrant population), the colleges are believed to have substantially more illegal immigrant students than the typical school in the U.S.

With its immense size and low admissions requirements, California Community Colleges may have more illegal students than any other college network.