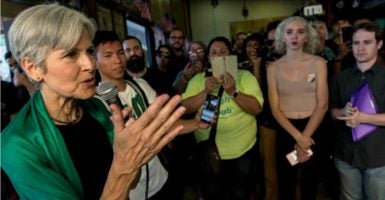 “The best hope whenever there is a recount is that it will validate numbers reasonably close to the original canvassing,” said Kay Stimson, spokeswoman for the National Association of Secretaries of State, representing state chief election officials. “It’s a reapplication of the canvassing procedure to determine voter intent. … In the likelihood that it varies from the norm, that will likely be adjudicated in court.”

To overturn the election result, recounts would have to flip all three states. Pennsylvania has 20 electoral votes, Michigan has 16 electoral votes, and Wisconsin has 10. A combination of any two would not be enough to overcome Donald Trump’s electoral vote lead over Clinton.

Wisconsin’s 72 county clerks will hire thousands of temporary workers to assist the county boards of canvassers in recounting the ballots, according to the Wisconsin Elections Commission, in order to meet the Dec. 13 deadline to certify results.

The recount effort has certainly elevated Stein’s profile and that of the Green Party, as she has raised $6.3 million for the recount effort in all three states, almost twice as much as the $3.5 million she accumulated for her entire presidential campaign. The goal is to raise $7 million to cover the cost of a recount in the three states, according to The Boston Globe.

Also, Stein received 12 times more attention from network evening news after demanding the recounts than she got during the campaign, according to a study by the Media Research Center, a conservative media watchdog.

As a presidential candidate, Stein was on the evening network newscasts for a total of 36 seconds throughout the entirety of the campaign season. Since launching the recount, her air time went up to 7 minutes and 26 seconds, the MRC study found.

Stein is suing Wisconsin for not requiring hand recounts. Such a requirement would slow the recount, and stall its completion beyond the certification deadline.

Stein has also sued Pennsylvania to force a recount after state officials said she missed the Nov. 21 filing deadline. She will likely be asking Michigan for a recount on Wednesday, according to reports.

Over the weekend, Clinton campaign lawyer Marc Elias announced the defeated campaign would participate in the recount effort, yet still was skeptical of overturning the results.

If Jill Stein follows through as she has promised and pursues recounts in Pennsylvania and Michigan, we will take the same approach in those states as well. We do so fully aware that the number of votes separating Donald Trump and Hillary Clinton in the closest of these states—Michigan—well exceeds the largest margin ever overcome in a recount. But regardless of the potential to change the outcome in any of the states, we feel it is important, on principle, to ensure our campaign is legally represented in any court proceedings and represented on the ground in order to monitor the recount process itself.

If states are required to do hand recounts, some are concerned it would hold up certification, and prevent either candidate from collecting the 270 Electoral College votes needed to ensure victory.

The states are not likely to do hand recounts, said Hans von Spakovsky, a senior legal fellow at The Heritage Foundation.

“I think Wisconsin counties will use machine recounts and not hand recounts,” von Spakovsky told The Daily Signal.

In Wisconsin, Republican Trump beat Democrat Clinton by more than 22,000 votes statewide. In the recently certified Michigan, Trump won by just over 10,000 votes. In Pennsylvania, Trump won with about a 70,000 vote lead.

“Recounts have flipped elections when you have hundreds of votes, but there is no way to switch 22,000 votes,” von Spakovsky said.

The recounts should be watched closely to ensure there is no repeat of the 2000 post-election controversy in Florida, where the standards seemed to keep changing, said Tom Fitton, president of Judicial Watch, a conservative watchdog group.

“There is a legal process in Wisconsin that allows this to take place,” Fitton told The Daily Signal. “Clinton, I’m not certain why she is involved. I hope this is not another recount and recount and recount until the result changes. There was so much gamesmanship in Florida with Al Gore’s campaign.”