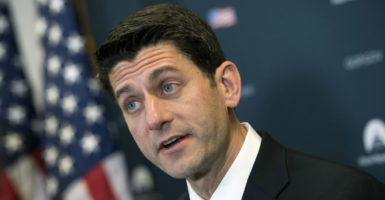 House Speaker Paul Ryan pleaded with his conference Wednesday to conduct the debate on earmarks in public rather than by secret ballot. (Photo: Kevin Dietsch/UPI /Newscom)

House Republicans were on the verge of bringing back earmarks Wednesday before Speaker Paul Ryan intervened to delay a decision until early next year.

A group of pro-earmark Republicans offered two amendments to House rules during a closed-door GOP meeting. Sources said the proposals were about to pass before Ryan asked Republicans to conduct the debate in public rather than by secret ballot.

Their decision to withdraw the amendments is only a temporary victory for conservative opponents of earmarks. Ryan will now oversee a showdown in early 2017 on an issue that became synonymous with government waste and pork-barrel spending during the GOP-controlled Congress of the early 2000s.

That means Republicans will be debating earmarks at the same time President-elect Donald Trump is trying to enact his 100-day agenda, which includes a promise to “drain the swamp” in Washington.

A source in the room described to The Daily Signal how Wednesday’s GOP meeting played out: “After a long debate, it was clear there’s a lot of pent-up frustration with ceding spending authority to the executive branch. Based on the comments by members, it was likely that an earmark amendment would have passed. Ultimately, the speaker stepped in and urged that we not make this decision today.”

Speaking on the condition of background, the source added this about Ryan: “He said we just had a ‘drain the swamp’ election and cannot turn right around and bring back earmarks behind closed doors. In exchange for withdrawing the earmark amendments, the speaker pledged to have a more thorough process to look at this issue and a vote on it by the end of the first quarter next year.”

One of the proposals would’ve allowed lawmakers to direct spending to special interests at a handful of government agencies, including the Department of Defense, the Army Corps of Engineers, the Department of Homeland Security, and the Bureau of Reclamation. That amendment also revived legislative earmarks for state and local governments, except for recreational facilities, museums, or parks.

A second amendment would have restored earmarks for Army Corps of Engineers projects.

The four proponents of the amendments were Republican Reps. John Culberson of Texas, Mike Kelly of Pennsylvania, Mike Rogers of Alabama, and Tom Rooney of Florida.

The changes they proposed Wednesday would have effectively ended the 6-year-old earmark ban ushered in after the tea party helped Republicans retake the House in 2010.

Now it’s Ryan who will have to worry about them.

If the amendment had been adopted by House Republicans at Wednesday’s meeting, lawmakers would’ve been able to request earmarks once again beginning in January. The amendment required the sponsoring member to be publicly identified, the earmarks to initiate in committee, and not increase spending.

“Today’s outcome was only a temporary victory as House Republicans left the door open to reopening the earmark favor factory next year,” said Heritage Foundation President Jim DeMint. “The American people made it crystal clear last week that it is time to drain the swamp in Washington—that includes keeping in place the ban on congressional earmarks.” Ryan’s silence on the issue leading up to Wednesday’s vote worried conservatives. In the end, his intervention simply delayed the fight for another day.

The Daily Signal broke news about the earmark fight Monday, prompting conservatives to speak out in strong opposition to the proposed changes.

At the monthly Conversations with Conservatives forum on Capitol Hill earlier Wednesday, even lawmakers who typically agree on spending issues found themselves at odds.

“The problem with the amendment today is that it does not have any reforms that we need,” Rep. Raúl Labrador, R-Idaho, said. “I’m opposing them and I think that most of us will oppose them.”

The fact that Republicans would even consider reviving earmarks on a secret vote raised is alarming, said Rep. Tim Huelskamp, R-Kan.

“If the Republican conference behind closed doors would airdrop earmarks back in with no public vote, then you’ve missed the message of the election,” Huelskamp said. “That’s not what the people want back again.”

But other conservatives took the opposite position.

“Congress, under Article I, is supposed to have line items in our appropriations where we say this is what the money goes for,” Rep. Louie Gohmert, R-Texas, said Wednesday.

“I share Louie’s opinion, but I’m not as animated,” Rep. Steve King, R-Iowa, added. “I did do some work on this. I think we ought to require that they’re authorized first before we can have an appropriation.”

The House debate also triggered interest among senators, who are also operating under an earmark ban.

Thank God we're not going back to corruption! @CNN: "Ryan slams brakes on vote to bring back #earmarks" https://t.co/ZCPfdMrGEm

Well we nailed em.Rs tried to bring back earmarks with secret ballot in closed door meeting. But watch,now Ryan says gonna try in the open. https://t.co/p1bGT3LXjw

Conservatives, citing the results of last week’s election, vowed to fight a change to the earmark ban—now or in the future.

DeMint, who played a key role halting earmarks while serving as a senator, urged lawmakers to focus their energy on other pressing issues.

“Legislative earmarking was a lynchpin of Washington’s crony system—a favorite of the politically and financially well-connected, it wasted huge amounts of money,” he said. “Instead of reviving this crony system, Congress should refocus their efforts on the mandate voters gave them: repeal Obamacare, pass tax reform to bring back jobs, secure the borders, confirm constitutional judges, and defeat ISIS.”