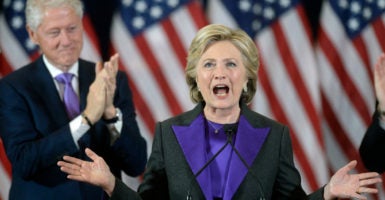 Hillary Clinton would have been a bigger target for investigators if the presidential election had gone differently, but that doesn’t mean the Democratic nominee and former secretary of state can put such legal questions behind her.

The FBI is conducting an ongoing investigation into potential “pay to play” at the Clinton Foundation, although it appears to have closed its investigation of Clinton’s official email.

During the presidential campaign, Republican nominee Donald Trump vowed to name a special prosecutor to continue the investigation into Clinton for her use of a private email server while conducting government business as secretary of state.

Immediately after his stunning victory over Clinton, the president-elect had only praise for Clinton’s campaign and public service.

In response to questions about prosecuting Clinton in the next administration, two Trump campaign surrogates rumored to be under consideration to be the next attorney general seemed to suggest turning the page on the matter in TV interviews Thursday.

It’s been a tradition in our politics to put things behind us. On the other hand, you have to look at how bad was it? Because suppose somebody comes along a year from now and is alleged to have stolen $50,000 from a charity—and [Clinton] was never investigated for hundreds of millions.

I will tell you they had an enormously gracious conversation with each other Tuesday night. Again, politics are over now, people have spoken, time to move on.

While FBI Director James Comey opted against recommending charges against Clinton in July, he said she acted recklessly in sending and receiving classified information on the nonsecure system.

Congress also will continue inquiries it began into the Clinton Foundation, the email matter, and questions about potential political interference in the FBI’s investigation of the private server.

One poll taken just before the election found that just more than one-third of Americans saw Clinton as honest, while another poll found an overwhelming majority believed she did something illegal or unethical with her private email server.

Such findings could make it difficult to rationalize dropping the investigations.

Judicial Watch, a leading conservative watchdog group, plans to continue its own investigations into Clinton through the use of Freedom of Information Act lawsuits. That’s because it isn’t relying on the Trump administration’s Justice Department or Congress to hold anyone accountable.

“The Trump administration and new Congress must focus on restoring the rule of law and accountability after the eight years of a lawless Obama administration,” Tom Fitton, president of Judicial Watch, said in a statement, adding:

Corruption in government is an overwhelming problem. We expect, but won’t rely on, D.C. politicians to do the right thing. Judicial Watch will continue its independent investigations and lawsuits in order to hold politicians of both political parties accountable to the rule of law.

After Judicial Watch asked a D.C. court to compel the State Department to answer more questions about Clinton emails, Fitton tweeted Wednesday: “No, it’s not over.”

Here’s an overview of investigations likely to continue even as Clinton moves out of the political arena.

Comey told congressional leaders just 11 days before Election Day that the FBI would reopen its probe into the private email server Clinton maintained while secretary of state. Then, two days before the election, he said the FBI concluded nothing would change the original decision not to recommend charges.

“Because Secretary Clinton was not forthcoming about her use of a private email server to send and receive classified information, a number of questions still remain and have not been answered by the Obama administration,” the same House Judiciary Committee aide told The Daily Signal ahead of the election. “The House Judiciary Committee will continue to seek answers about Secretary Clinton’s unauthorized use of a private email server.”

Based on the FBI’s initial findings, House Judiciary Chairman Robert Goodlatte, R-Va., and House Oversight and Government Reform Chairman Jason Chaffetz, R-Utah, said in August that Clinton may have lied under oath to the House Select Committee on Benghazi in October 2015. They asked the Justice Department to investigate.

Reports surfaced days before the election that the FBI had made the Clinton Foundation a “very high priority” investigation, one that it has conducted for more than a year.

Throughout the course of Clinton’s campaign, she dealt with “pay to play” charges based on what some alleged was direct State Department action after larger foreign donations to her family foundation.

In May, 52 House members asked IRS Commissioner John Koskinen to investigate the Clinton Foundation to determine if it was abiding by the rules of a legitimate tax-exempt charity. In July, 64 House members asked the IRS, FBI, and Federal Trade Commission to look into the foundation. The FTC has some regulatory authority over nonprofits.

WikiLeaks exposed numerous emails related to the Clinton Foundation, including one from 2015 in which Clinton staffers were debating whether it would look proper for her to go to Morocco to collect a $12 million donation for the foundation.

Among the most noteworthy cases, Uranium One Chairman Ian Telfer gave $2.35 million to the foundation. Clinton’s husband, former President Bill Clinton, collected $500,000 to give a speech in Moscow at an event promoting Uranium One stock. As secretary of state, Hillary Clinton was among U.S. officials who approved the Uranium One sale to Russian investors.

Members of Congress also noted that Bill Clinton accepted $16.5 million to serve as the honorary chancellor of Laureate International Universities, a company founded by businessman Douglas Becker that gave between $1 million and $5 million to the Clinton Foundation.

Beyond the underlying matters, the committees could seek to find out more about how the Justice Department, the FBI, and the State Department reacted in the course of the investigation into Clinton’s use of a private email server to conduct official business.

“We’ve seen the politicization of federal agencies and possible felonies by government officials in the course of the FBI investigation, with possible obstruction, destruction of evidence, and perjury,” Peter Flaherty, president of the National Legal and Policy Center, a government watchdog group, told The Daily Signal in a phone interview.

“The DOJ itself should be investigated,” Flaherty said of the Justice Department.

Multiple congressional committee chairmen wrote Attorney General Loretta Lynch to ask about the unusual restrictions placed on the FBI during the initial probe of Clinton’s use of email, such as orders to destroy laptops after the investigation concludes.

Fox News, citing House Judiciary Committee sources, reported that Clinton aides with immunity deals had a side arrangement with the FBI to destroy their laptops after a review.

Goodlatte also asked the Justice Department to investigate emails from Undersecretary of State Patrick Kennedy, who in one message appeared to offer to place FBI agents in additional overseas locations if the bureau would agree to declassify some documents related to the terrorist attacks on the U.S. consulate in Benghazi, Libya, on Sept. 11, 2012, that left four Americans dead.

While members of Congress made these inquiries before the election, Justice Department officials generally are obligated to respond to their questions.

Before he became deputy director of the FBI, McCabe’s wife, Jill McCabe, ran for the Virginia state Senate in 2015. During her campaign, McAuliffe’s political action committee, Common Good VA, gave $467,000 to her campaign.

Chaffetz sent an article to committee members about McAuliffe’s campaign donation to the wife of someone who would go on to become a top FBI official, The Washington Post reported.

“It seems like an obscene amount of money for a losing race,” Chaffetz told the newspaper. “The ties between the governor and the Clintons are well known. He raises money for a lot of people, but why so much for this one person?”

Aside from the Justice Department and Congress, the Federal Election Commission could investigate Clinton’s campaign. The agency delves into credible allegations of campaign finance violations regardless of whether the campaign was victorious.

Investigative filmmaker James O’Keefe made the FEC complaint against the Clinton campaign and the Democratic National Committee.

O’Keefe’s Project Veritas Action Fund released videos that appeared to show evidence of coordination among the Clinton campaign, the Democratic National Committee, and three super PACs. In one video, an Americans United for Change director is seen saying the organization paid mentally ill people to disrupt Trump rallies. Direct coordination between a campaign and independent groups is not permitted by law.

Rep. Tim Murphy, R-Pa., chairman of the oversight and investigations subcommittee of the House Energy and Commerce Committee, said in an October tweet that he was “stunned” by O’Keefe’s recent undercover videos.