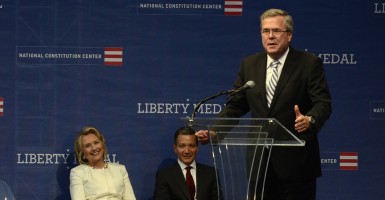 Jeb Bush prepares to present the Liberty Medal to Hillary Rodham Clinton on Sept. 10, 2013. Seated with her is Jeffrey Rosen, president and CEO of the National Constitution Center. (Photo: Hugh Dillon/WENN.com/Newscom)

A conservative group’s new online ad portrays Jeb Bush as “unelectable” to the presidency because the Republican presented a public service award to the Democratic favorite, Hillary Rodham Clinton.

Clinton received the award, the video emphasizes, on Sept. 10, 2013 – one day short of the first anniversary of the terrorist attacks on U.S. facilities in Benghazi, Libya, that left four Americans dead and stained her legacy as secretary of state.

“It’s bad enough that Hillary Clinton will likely use footage from this event against any Republican nominee,” Bozell said in a release sent to The Daily Signal, “but if Jeb Bush is her opponent she will make him look ridiculous.”

The Daily Signal has sought comment from a Bush spokeswoman, but she has not responded.

The video includes short clips of Bush and Clinton speaking separately at the 2013 event at the National Constitution Center, where the former secretary of state received the museum’s Liberty Medal.

“Jeb has absolutely no credibility to criticize [Hillary Clinton] because he has already anointed her as a great public servant.”-@BrentBozell

However, neither the video nor the group’s release notes that Bush was chairman of the National Constitution Center at the time, making the former Florida governor the natural presenter of its annual award.  According to the institution’s website,  he remains chairman — a largely honorary role previously held by his father, former President George H.W. Bush, and by former President Bill Clinton.

Congress established the museum and education center to promote understanding of the Constitution in a nonpartisan manner. President Ronald Reagan signed the 1988 bill laying out the details.

Bozell, author of “Whitewash,” a 2007 book that was highly critical of Clinton, also said of the video linking Bush and Clinton:

Anytime Jeb calls Hillary ‘Obama 2.0,’ any criticism he makes of her awful record as secretary of state, any time he shows how much of an extremist she is on the issues, will be completely dismissed when she reminds everyone that he gave her an award for public service.  As it stands, Jeb has absolutely no credibility to criticize her because he has already anointed her as a great public servant; and he inexplicably did so almost a year to the day of the Benghazi massacre.

In a press release about the Liberty Medal, the Philadelphia-based museum said Clinton would receive the 2013 honor “in recognition of her lifelong career in public service and her ongoing advocacy efforts on behalf of women and girls around the globe.”  It noted that Bush, “chair of the National Constitution Center, will award the prestigious medal to Secretary Clinton” as part of the televised 25th annual ceremony.

Bozell’s group timed release of the video to follow Bush’s major address on foreign policy yesterday, in which the Republican laid far-flung failures at the doors of both President Obama and Clinton, secretary of state during his entire first term.

In the speech in Chicago, Bush also sought for the second time in two weeks to set himself apart from his father and older brother, the last two Republican presidents, declaring, “I am my own man.”

U.S. Ambassador Chris Stevens and three other Americans were killed in the Benghazi attacks. A select committee of the House of Representatives is the latest congressional body to investigate the actions of Obama, Clinton and other civilian and military officials before, during and after the attacks.

Neither Bush nor Clinton is an announced candidate for president, but both are busy staffing up and raising money.

ForAmerica counts tens of thousands of supporters in Iowa, New Hampshire, South Carolina, Florida and the five other states that will hold the first round of primaries and caucuses of the 2016 presidential race.

Bozell describes ForAmerica as an “online army of over 7.1 million people,” a reference to its total number of Facebook followers. The nonprofit’s mission is to educate Americans about the nation’s founding principles, including limited government, individual liberty and economic opportunity.