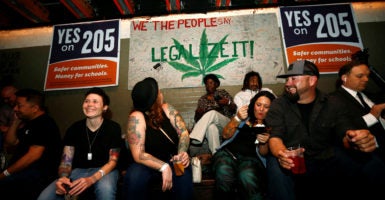 Ballot initiatives on legalizing recreational or medical marijuana in seven states won big Tuesday as voters weighed in on the controversial proposals.

Voters in four states—Arkansas, Florida, Montana, and North Dakota—voted to legalize medical marijuana, making medicinal use of the drug legal in more than half of the states.

Voters in three states—California, Massachusetts, and Nevada—voted to legalize the recreational use of marijuana. Recreational pot smoking by those older than 21 is now legal in nine states and the District of Columbia.

A similar proposal in Arizona failed, and another in Maine was split 50-50, with 98 percent of precincts reporting.

Supporters of the initiatives in the five states with recreational marijuana on the ballot argued that legalizing the drug would put more money in state coffers.

Marijuana remains illegal under federal law. The government lists it as a Schedule I drug under the Controlled Substances Act.