California Voters to Decide Whether Schools May Teach Students in Spanish 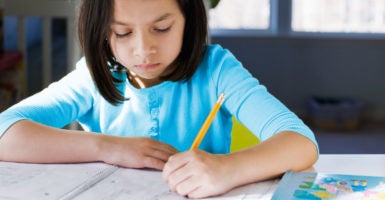 Voters in California are asked to weigh in on whether public schools should be allowed to instruct students in languages other than English. (Photo: Jon Feingersh/Blend Images /Newscom)

Voters in California will weigh in Tuesday on a decades-old debate about bilingual education in the state’s public school system. The outcome ultimately could determine whether California schools will continue to be required to teach in English, or may use Spanish or another language.

Although largely overlooked in a crowded election season, the issue has split Californians into two camps, those who believe the country benefits from a multilingual society and those who believe such policies hurt students and serve only to further ethnic and racial divides.

Advocates of the ballot measure, Proposition 58, argue that public schools should have the freedom to determine the most effective way to teach English learners (students who speak English as a second language)—through an English-only classroom, a bilingual classroom, or another type of program.

Opponents say bilingual education programs worsen the rift between immigrant families where English is not the first language and families where it is, and actually strip parents of their ability to access an English-only education for their children.

In California, 1,373,724 students are English learners, making up nearly 1 in 4 children enrolled in public schools. Officials say 83.5 percent of those students speak Spanish as their primary language, and the majority of English learners are enrolled in elementary schools from kindergarten through sixth grade.

Proposition 58 was placed on the ballot by the Democrat-controlled Legislature and Gov. Jerry Brown, a Democrat. If passed, the measure would be the most significant change to the state’s bilingual education policy since Proposition 227.

Proposition 227, passed in 1998, requires that public school instruction be conducted in English. If parents want to keep their children in a bilingual classroom or program, they’re required to sign a waiver. Typically, English immersion classes don’t extend past one year.

Proposition 227 passed almost two decades ago with 60.1 percent of the vote. Michael Gonzalez, a senior fellow at The Heritage Foundation, attributed that to the desire among immigrant families to educate their children in English.

“That is because immigrants from Latin America wanted their children to learn English fluently in school even if they retain Spanish as their home language,” Gonzalez said, adding:

Gonzalez, a critic of initiatives such as Proposition 58, has both personal and professional experience with bilingual education programs. In the 1970s, his family came to America from Cuba via Spain. When he attended the New York City public school system, the city enrolled him in a bilingual program, despite his family’s doubts.

“The program delayed my immersion into English, created an added wedge between new immigrants and other students, and was sometimes used as a dumping ground for troubled Spanish-speakers more fluent in English,” Gonzalez wrote for The Wall Street Journal in 1995.

In an interview with The Daily Signal, Gonzalez warned that programs such as the California initiative hold immigrant families back.

“It is always good for individuals to speak one or two extra languages, an asset that enriches their lives professionally and culturally,” he said. “What is not beneficial is for society to become bilingual or multilingual. Democracy, especially in a constitutional republic, requires robust political debate, which in itself requires one medium of communication.”

“Given California’s size and importance as a cultural trendsetter,” he added, “this effort should be taken seriously.”

Supporters of Proposition 58 argue that allowing students to learn in Spanish or another native language not only helps English learners, but also expands opportunities for English-speaking students to learn a second language. They argue the initiative will help the next generation compete in a global economy.

“[Proposition 58] will allow our California workforce to continue to produce multilingual, multiliterate students to help us advance our goals to create a global workforce,” state Sen. Ricardo Lara, D-Long Beach/Huntington Park, said in support of the measure.

Even with the reduction in bilingual education as a result of Proposition 227, California’s [English-language learner] students are still taking far too long to become fluent. Meanwhile, dual-language immersion programs—in which native English-speaking students and those who started with another language at home are brought together to learn in both languages—are increasingly popular and, early signs suggest, effective. There is also heightened recognition of economic globalization, and the greater diversity and multilingualism of California, that make bilingualism attractive.”

Dual-language immersion programs at schools offer instruction in English and another language. Often, they’re divided into a 50:50 model, where English and a second language are taught evenly, or a 90:10 model, which eventually works its way to meet the 50:50 balance as students become more fluent in English.

“What immigrants, and America, need is a united society with a level playing field so that all Americans, no matter their background, can compete in the American economy without being disadvantaged by poor English-language skills,” Gonzalez told The Daily Signal.

A study conducted by the the University of California, Berkeley, found that Proposition 58 has strong support among California voters until they are informed that the measure would repeal Proposition 227, which requires schools to teach almost exclusively in English. At that point, the majority of voters polled opposed the measure.

However, the study notes, “the official ballot label, which was drafted by the [California] Attorney General’s Office, makes no mention of Proposition 227, and instead labels Proposition 58 as the ‘English Proficiency, Multilingual Education’ initiative.”

“This is why when parents are informed that Proposition 58 mostly repeals Proposition 227,” Gonzalez said, “support for the measure falls from 69 percent in favor to 51 percent against.”