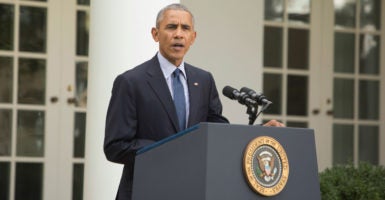 President Barack Obama makes a statement on the ratification of the Paris Agreement in the Rose Garden of the White House in Washington, D.C., Oct. 5, 2016. (Photo: Chris Kleponis/CNP /AdMedia/Newscom)

Republican lawmakers have asked the Obama administration to be more “forthright” with the international community about the limits of his authority to implement a United Nations climate treaty without Senate approval.

“We are concerned the administration has not been forthright in acknowledging the legal limitations of the president’s domestic climate actions,” Republicans on the Senate Committee on Environment and Public Works wrote in a letter to Secretary of State John Kerry.

Republicans sent their letter days before U.N. delegates meet in Marrakech, Morocco, to begin implementing the U.N.’s global warming treaty, which was recently ratified by enough countries to come into force this year.

Republicans argue President Barack Obama needs to be honest with the nearly 200 other countries that signed the U.N. agreement in April about the limitations on his ability to meet his global warming pledge just using his executive authority.

“We urge you to be candid with parties to the agreement to preserve the diplomatic credibility of the United States,” Republicans wrote.

Obama promised to cut U.S. greenhouse gas emissions 26 to 28 percent by 2025. Obama’s ambitious pledge—and every domestic regulation crafted to meet it—was meant to convince China to sign onto the deal.

Obama ratified the U.N. deal in September alongside Chinese President Xi Jinping. China pledged to “peak” emissions by 2030, but made no promise to actually cut global warming emissions.

Republicans warned that bypassing the Senate, Obama is relying on his “sole executive authority” to enforce the treaty, meaning it’s “no different than the president giving a speech, or stating at a news conference” that he’s fighting global warming.

Environmentalists who backed the agreement are worried Republican presidential nominee Donald Trump would pull out of the U.N. deal. Indeed, he’s promised to do so.

But some argue it’ll be difficult for Trump to pull out of the agreement if it’s already in effect. That’s why the Obama administration will heavily focus on implementing the UN treaty at the Marrakech meeting.

“The Paris Agreement was a turning point in terms of setting in place an international framework for action, and in the COP that is coming we intend to really intensify our work turning toward implementation,” Morton said.

Obama’s got a big problem though—the regulation at the center of his global warming agenda is being challenged in the courts.

Dozens of states and business groups have challenged the Clean Power Plan, and were successful in convincing the Supreme Court to issue a stay against the rule earlier this year.