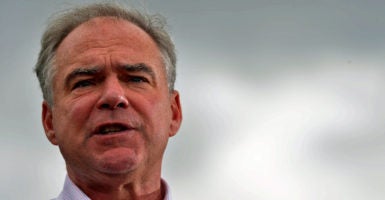 Vice presidential candidate Tim Kaine says Democrats would “change the Senate rules” to confirm a ninth Supreme Court justice if they win control of the upper chamber in November.

“I have a prediction,” Kaine said in an interview last week with The Huffington Post. “This is not a guarantee and I’m not revealing inside intel. I was in the Senate when the Republicans’ stonewalling around appointments caused Senate Democratic majority to switch the vote threshold on appointments from 60 to 51, and we did it on everything but a Supreme Court justice.”

Kaine is a U.S. senator from Virginia who in 2013 supported the then-Democrat majority’s “nuclear option” that ended the Senate filibuster on most judicial nominees.

Republicans, who currently control the Senate, have refused to hold hearings for President Barack Obama’s Supreme Court nominee, Merrick Garland, who serves as chief judge of the U.S. Court of Appeals for the D.C. Circuit. Garland was nominated by Obama in March to fill the seat of Justice Antonin Scalia, who died in February.

In the interview with The Huffington Post, Kaine referenced remarks from Sen. Ted Cruz, R-Texas, where Cruz told reporters at a rally in Loveland, Colorado, that there is a “precedent” for an evenly divided, eight-member court.

“Ted Cruz, I think is being slightly disingenuous,” Kaine said. “The Constitution doesn’t set the size of the court. It sets a maximum I think of 15. But since the Judiciary Act of 1869, it’s been a nine-member court. That’s what the statute says. We take an oath to uphold the law, that’s what we’re upholding.”

Cruz isn’t the only Republican senator to raise the prospect of an elongated fight over Democrat presidential candidate Hillary Clinton’s Supreme Court nominees.

In addition, according to CNN, Sen. John McCain, R-Ariz., said in a radio interview that Republicans would be united against Clinton nominees.

“Congress could change it, if Congress wanted to and had the votes, but Congress won’t,” Kaine said. “So until Congress does, that’s the size of the court. And the battle is, do we want a lawfully constituted full court or will we let the Republicans have a hobbled, limited, and weakened court?”

Kaine said that he believes the stalemate to be occurring so that senators will not be held accountable by their constituents.

“[The] Senate has to advise and consent,” Kaine said. “That doesn’t mean you have to vote yes. You can vote no. It’s not a rubber stamp. But what these guys are doing is, ‘Wait a minute. We don’t have to vote yes or no. And maybe we can trick our voters into not holding us accountable for not voting yes or no.”

Kaine is confident that if the stalemate continues, Democrat senators will take action.

“If these guys think they’re going to stonewall the filling of that vacancy or other vacancies,” Kaine said, “then a Democratic Senate majority will say, ‘We’re not going to let you thwart the law.’ And so we will change the Senate rules to uphold the law that the court will be nine members. … I am predicting that if the Republicans continue to stonewall, then I think that will happen.”