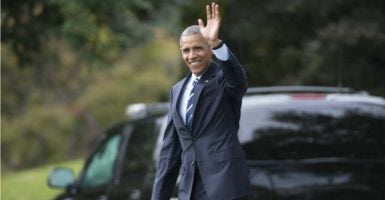 This year, the White House has a growing list of threats to veto the NDAA defense bill. (Photo: MollyRiley/UPI/Newscom)

This week the White House signaled that it might veto the National Defense Authorization Act (NDAA) if a religious freedom amendment remains in the final package.

While this may just be political posturing, it fits a clear pattern of President Barack Obama’s willingness to use national security, and the defense bills in particular, as hostages to help him advance an unrelated domestic agenda.

The NDAA is an annual bill that Congress has passed every year for over 50 years straight. The bill covers a range of issues, from troop pay to the size of the Army to the legal authority for assisting other countries who are fighting the Islamic State.

Since the 1970s, the bill has been vetoed only a handful of times, and no president in modern history has vetoed two National Defense Authorization Acts. But it looks like Obama may want to change that.

The latest controversy surrounds the Russell Amendment, which is explained by two Heritage Foundation analysts:

Last year, Obama vetoed the NDAA. He claimed there were a couple of reasons, but the primary one was that he didn’t want to increase the defense budget (which last year’s NDAA did) without also increasing funding for his nondefense priorities.

The president supported increasing the defense budget, but only if non-defense was also increased. In other words, Obama vetoed last year’s NDAA for budget leverage, not because of any particular issue in the bill.

This year, the White House has a growing list of threats to veto the NDAA. In its statements on the House and Senate versions of the NDAA, the White House suggested it may veto the bill because it increases funding for defense using the budget account reserved for overseas operations, it doesn’t include all the defense reforms that the Pentagon wants, it restricts Obama’s ability to close the prison at Guantanamo Bay, it proposes reorganizing parts of the Pentagon in a way the administration doesn’t favor, it includes provisions limiting military engagement with Cuba, and more.

The latest news is that the White House might be serious about vetoing the NDAA if it contains the Russell Amendment. As outlined by my colleagues, the Russell Amendment is simply a restatement of current law, but apparently that is enough to warrant the threat of an Obama veto.

Of course, all of this posturing is happening before the final bill is written. Congress will come back next month to finish this bill and other items, so these threats are aimed at convincing members of Congress to drop these provisions in advance. And some of these veto threats may also be made with election politics in mind. So we have lots of threats about a bill that no one has seen yet.

With all these threats, we should remember why this bill matters. Providing for the national defense is the first responsibility of the federal government, and threats against U.S. vital interests are rising while the U.S. military is getting smaller and weaker. Instead of political games, the president should be focused on how to use the NDAA to help rebuild the U.S. military.

As outlined in a Heritage Foundation report on the NDAA, the bill should start restoring the capabilities of the Army and the Navy. It should invest in increased combat readiness for our troops today, and in better, more modern equipment for our troops in the near future.

The Index of U.S. Military Strength, an annual report from Heritage, has shown that our military is not prepared at the exact time that threats are rising. The next edition of the index comes out in a few weeks, and the news is likely to be the same: rising threats, weaker military.

The NDAA debate should be about growing and strengthening our military, not vetoing threats over tangential issues. Obama should work with Congress in a constructive manner to get the NDAA finished and signed into law so that our military can start rebuilding.