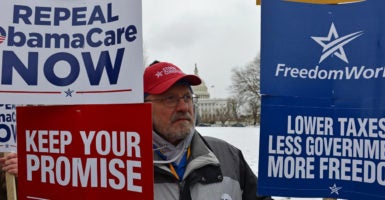 Conservatives in the House are proceeding with cautious optimism as they continue negotiating the bill that repeals and replaces Obamacare following an admission from House Speaker Paul Ryan that the legislation needs to undergo necessary “improvements and refinements.”

The concession from Ryan comes just a week after the Wisconsin Republican told his fellow Republicans the bill, called the American Health Care Act, was the “closest we’ll ever get to repealing and replacing Obamacare.”

But following the release of a report from the Congressional Budget Office that predicted premiums would initially rise under the proposal and 14 more million people would be without insurance next year, conservatives say they believe the door is now open for them to unite the conservative and moderate wings of the conference.

“We don’t want to completely ignore moderate members of the House,” Rep. Raúl Labrador, R-Idaho, told reporters Thursday at a monthly Capitol Hill gathering. “That would be bad negotiating.”

“The final product has to be representative of every member of Congress,” he continued.

Labrador and members of the House Freedom Caucus are drafting an amendment to the House GOP’s Obamacare replacement plan they say is designed to “find reasonable middle ground.”

The conservative lawmakers wouldn’t share the details of the plan, which will be presented to Republican leadership and members of the House Rules Committee next week.

But Rep. Jim Jordan, R-Ohio, said their amendment would be “consistent with the promise to the American people.”

“We’re focused on repealing Obamacare and bringing down the cost of premiums,” he said. “And that’s what our amendment is designed to reflect.”

Members of the Freedom Caucus have frequently criticized the insurance regulations and mandates implemented under Obamacare for raising the cost of premiums, and have called on GOP leaders to repeal those provisions.

The conservative lawmakers say they are vehemently opposed to the proposal rolled out by House leaders last week.

“The problem with this bill is that everything is wrong with it,” Labrador said Thursday.

But conservatives aren’t willing to abandon Ryan yet, and are instead saying they hope that the House speaker and the chamber’s right flank can begin negotiations.

“The rollout and the way it was rolled out was not indicative of an open process,” Freedom Caucus Chairman Mark Meadows, R-N.C., said of the Obamacare replacement plan. “Is it an indictment on his speakership? No, I don’t see that. I think we’re going to move on and end up finding a way to get this done.”

Since the House GOP revealed its long-awaited plan to repeal and replace Obamacare last week, Ryan has been fielding complaints from all sides of the House Republican conference.

Conservatives are concerned the bill will cause health insurance premiums to rise, and their fears were compounded by the CBO’s analysis of the legislation.

The nonpartisan agency, which works for Congress, estimated that under the Obamacare replacement plan, premiums would increase by 15 percent to 20 percent over the next two years before dropping 10 percent by 2026.

The opposition from both wings has left Ryan trying to strike a delicate balance.

The speaker needs 216 votes—there are currently five vacant seats in the House—for the Obamacare replacement plan to pass. Republicans control 237 seats, and opposition from 22 GOP lawmakers would sink the bill in the lower chamber.

Initially, Ryan stressed the GOP’s proposal was a “binary choice.”

But after a closed-door meeting with his fellow Republican lawmakers Wednesday, Ryan conceded that the bill needed to be changed for it to pass the House and attributed the strategy shift to the CBO’s report.

“Now that we have our score … we can make some necessary improvements and refinements to the bill,” Ryan told reporters.

For conservatives, who have been meeting with President Donald Trump and administration officials frequently, the change of heart from the speaker was “welcome news.”

“I welcome the fact that Speaker Ryan is now talking about the fact that we’re going to actually negotiate in good faith, to come up with something that serves the American people,” Meadows said Wednesday night.