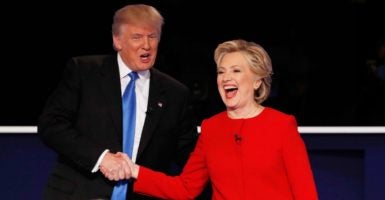 Maybe Bill Clinton should moderate Sunday’s presidential debate. Referring to Obamacare this week as “the craziest thing in the world,” he seems to understand that the consequences of the health care law might be of interest to voters.

Indeed, according to a recent Pew Research Center poll, 71 percent of Donald Trump supporters and 77 percent of Hillary Clinton supporters say the issue of health care is “very important” to their vote in 2016.

Well, perhaps it’s only odd if you don’t know the major broadcast networks have all but ignored the disastrous news stories about Obamacare.

According to the media watchdogs over at the Media Research Center, from Jan. 1 through Aug. 31, ABC’s “World News Tonight” and “NBC Nightly News” have not covered the issue at all. “CBS Evening News” dedicated a whopping 2 minutes and 18 seconds to the subject.

As the Media Research Center notes, “To put that in perspective, these same three evening news shows managed to find 46 minutes and 49 seconds to dedicate to Olympic swimmer Ryan Lochte running afoul of Brazilian police.”

Maybe we’ll get a question about Lochte in the next debate.

There are so many questions that could be posited about Obamacare’s failures that perhaps the moderators just haven’t been able to choose which one to ask. For example:

Sir/Madame: The Government Accountability Office just announced last week that its investigation has determined that Health and Human Services has been illegally bailing out insurance companies with taxpayer dollars. What’s your reaction?

Sir/Madame: What do you say to the hundreds of thousands of Americans who have lost the insurance they bought through Obamacare’s public co-ops? So far, 12 of the 23 co-ops have failed and been shut down, costing taxpayers $1.2 billion and forcing 740,000 people in 14 states to scramble to find new health insurance.

Sir/Madame: Contrary to what President Barack Obama originally promised, many Americans’ premiums did not go down, they’ve gone up. And the evidence suggests they will continue to rise. By 2025, the Congressional Budget Office predicts that employment-based coverage will cost about 60 percent more than it does today because of Obamacare. How will you address that?

Or … (my personal favorite)

Sir/Madame: Former President Bill Clinton referred to Obamacare as “the craziest thing in the world.” Do you agree with his remarks?

So many options but not one single question in either debate on the topic.

And yet, abortion, which fewer than half of voters say is very important to their vote, was a major topic in the vice presidential debate.

And I’m not saying it isn’t important. But why did CBS moderator Elaine Quijano think it was more important to voters than the issue of health care?

If she’d done a little more homework, she might have been able to combine the two issues by asking what the candidates thought about a report from the Government Accountability Office showing that Obamacare forces taxpayers to subsidize bills for abortion services.

One might think that, in the post-debate analysis, some in the media might start asking about what major issues have not been addressed.

The folks over at NBC News apparently did ask that question but got the wrong answer.

It doesn’t mention that voters rank that issue over 30 percentage points behind health care as important to their vote.

To say the media doesn’t get it lets them off the hook way too easy. They get it all right. Obamacare is a disaster but they’re hoping voters won’t notice.