How to Ask a Question at the Next Presidential Debate 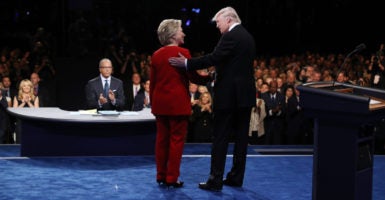 In an effort to foster widespread participation for the upcoming presidential debate Sunday, one organization has created a website where any interested individual can submit questions.

PresidentialOpenQuestions.com, created by the Open Debate Coalition, is a website where anyone can submit a question for the presidential town hall debate hosted by CNN and ABC.

Created during the 2008 presidential election season, the Open Debate Coalition’s sole purpose, according to its website, is “to make debates more representative of the will of the people.”

“The whole genesis of the open debate format came from a group of bloggers and the realization that the media has a monopoly over the debate process,” Lilia Tamm Dixon, program director for the Open Debate Coalition, told The Daily Signal in a phone interview.

Further inspiration for this initiative came when Facebook and YouTube began collecting questions online from viewers leading up to the debates as well as during the debate.

Dixon said that it was the group’s goal to build off what Facebook and YouTube had already started.

What sets the Open Debate Coalition apart from other websites or organizations that collect questions for presidential debates is the format in which the questions are presented.

Dixon believes this format to be the most effective way for questions to actually make it to the moderator’s desk come debate night, as the Open Debate Coalition presents entirely nonpartisan, pure data to the news networks hosting the debate.

To submit a question, one must first choose from one of 10 categories—ranging from civil rights to foreign policy and military, to health and infrastructure and technology—and then write the question.

After the question is written, users are given an option to include any supporting text or a link to additional material. Questions can be up to 80 characters and supporting text up to 200.

Dixon told The Daily Signal that her organization purposely collects little demographic information in order to encourage as much involvement as possible.

“We try to keep demographic information low because the more fields people have to fill out the less likely they are to participate in asking a question,” Dixon said. “The only thing we are tracking is geographic location.”

Users of the website can also vote for other questions so that common themes and policy issues can be easily identified and given a rank of importance, allowing the website’s viewers as well as the hosting networks to see the popularity of various themes and questions.

The state of health care is one popular topic, with some questions currently receiving over 12,000 votes.

“As many as 11 of the top 50 questions had to do with something health related, such as single-payer insurance and Obamacare,” Dixon said.

While the Open Debate Coalition won’t be hosting the debate on Sunday, ABC and CNN have agreed to receive the most popular 30 questions from the organization for consideration in the town hall segment of the debate.