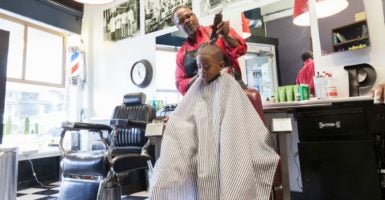 The Arizona State Board of Barbers issued a“final warning” in response to reports that barber shops in the state were “allowing unlicensed individuals or students to work.” (Photo: Jetta Productions Blend Images/Newscom)

A government-sponsored board in Arizona has posted this message on the front page of its news column, under the heading “ATTENTION TO ALL SHOPS.” What is the intolerable crime in question? Unlicensed barbering.

“Break the law and pay the fine. Work fairly or pay dearly!!” The Arizona State Board of Barbers issued this “final warning” in response to reports that barber shops in the state were “allowing unlicensed individuals or students to work.” Oh, the horror! The message promises to levy swift and steep fines of $1,500 per unlicensed worker on any shop that dares employ those seeking work.

Nationwide, jobseekers  and business owners are dealing with the consequences of the massive expansion of unjustifiable occupational licensing schemes that have no connection to public health and safety.

Occupational licensing is part of a regulatory scheme that requires workers to attend classes, pass examinations, and pay sometimes exorbitant fees before entering certain professions. It is essentially a government permission slip for work, and Arizona, along with every other state, requires that barbers obtain such a license before they can ply their trade.

To become a barber in Arizona, one must pass the 10th grade or obtain a GED, spend 1,500 hours at a barber college, pay $100 to take written and practical tests, and pay an additional $40 license fee and $80 biannual renewal fees.

Moreover, Arizona has license reciprocity with only 28 states and charges $175 to applicants from those states seeking work in Arizona. If you are already a licensed barber from one of the other 21 states and you now want to ply your trade in Arizona, you have to start from square one.

Free-market economists have criticized unnecessary licensing requirements, pointing out that such requirements pose unreasonable barriers to those seeking to enter certain professions, resulting in fewer service providers and increased costs to consumers.

As Heritage Foundation research fellow James Sherk points out, on average, wages in regulated professions are inflated by 18 percent—gains made entirely at the expense of consumers.

Even the Obama administration stated in a 2015 study, “By making it harder to enter a profession, licensing can also reduce employment opportunities and lower wages for excluded workers, and increase costs for consumers.” That report also pointed out that nearly one-quarter of all workers in the United States are now employed in a state-licensed profession, a massive surge from just 5 percent of workers in the 1950s. Most of this growth is attributable to the expansion of licensing regimes, rather than a shift in the workforce toward historically licensed professions.

To become a barber in Arizona, one must pass the 10th grade or obtain a GED, spend 1,500 hours at a barber college, pay $100 to take written and practical tests, and pay an additional $40 license fee and $80 biannual renewal fees.

Those in favor of occupational licenses argue that they are necessary to ensure safety and quality within an industry. In some cases—like doctors and pilots, for example—they have a point. Fears of dangerous barbers and other low-risk professions are unfounded, however, as demonstrated .

Alabama was the last state to establish a board of barbers, passing its occupational licensing legislation in May 2013. Decades earlier, Alabama had actually eliminated its barbering board, and in the ensuing decades barbers were not regulated or inspected.

Oddly enough, one cannot find any reports of Alabama barbers abusing their customers or placing them at risk of anything other than a bad haircut, a problem that can easily be remedied through a series of one-star Yelp reviews.

If not for health and safety risks, why impose the licensing requirement? The short answer is protectionism. Entry barriers such as licensing requirements heavily favor those already employed in the licensed profession by reducing their competition, thereby allowing them to charge higher fares for their services.

In some cases, incumbents are exempt from the new rules altogether, thanks to generous grandfathering clauses that apply the new rules only to new workers. That is why, in many cases, those in a given profession argue for burdensome regulations—a seemingly counterintuitive phenomenon known as rent seeking.

One recent example of this is the taxi industry lobbying to regulate ride-hailing companies like Uber in virtually every city and state. For decades taxi companies have enjoyed the protection of anti-competitive licensing schemes and medallion systems that do not apply to rideshares.

Taxi companies have struggled to compete, in part because government bodies control virtually every aspect of their business. Yet taxi companies have universally been lobbying those in power to regulate their competitors, not to deregulate the taxi industry. They seem to be less concerned about satisfying consumers in a competitive market and more about protecting themselves from competition.

If Arizona lawmakers truly desire to provide a safe environment for consumers and increase the number of jobs available in their state, they should rescind these burdensome regulations. In their place, the government could implement a certification system, which would allow highly trained and skilled professionals to highlight their prowess by earning a certificate while not barring others from entering the profession.

Such an environment would permit individual barber shops to develop apprenticeship programs that could replace costly courses at barber college. Even better, the government could recognize that barbering is hardly a life-threatening activity and back out of the space altogether, allowing competition to flourish.

In either case, Arizona consumers would benefit from having to pay less for a trim and a shave, while having more options available to them. The self-imposed 2016 Arizona Barber Plague will surely continue until the government realizes it’s time to clear the path to employment at the barber shop.