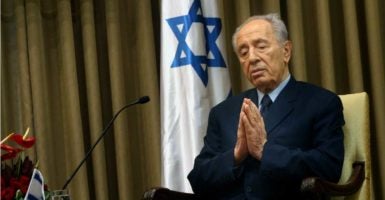 Andrew Santora is a member of the Young Leaders Program at The Heritage Foundation.

Shimon Peres, the former prime minister and president of Israel, died Wednesday morning in a hospital in Tel Aviv. He was 93. His passing marks the end of an era as the last of Israel’s founding generation of statesmen, and Israel’s loss will be felt around the world.

Peres had suffered a stroke Sept. 13.

At the time of Israel’s independence in 1948, Peres served as the head of the naval services. He rose quickly through the ranks and was promoted to the position of director general of the Defense Ministry when he was only 29 years old.

By the time he retired from the presidential office in 2014, Peres had spent more than two-thirds of his life in public service.

He was present in an active role for every major Israeli milestone: from the country’s independence to its emergence as the world’s suspected sixth nuclear power and a strong U.S. ally.

Peres was awarded the Nobel Peace Prize in 1994, along with Yitzhak Rabin and Yasser Arafat, in recognition of their efforts to negotiate the 1993 Oslo peace accords.

The failure of that agreement to bring a genuine peace, combined with continued Palestinian terrorist attacks, led many Israelis to conclude that his vision for a “New Middle East” was excessively optimistic.

Despite this, Peres produced remarkable achievements during his long government service in many fields.

His optimism and thirst for innovation encouraged Israel to seek peace when it could and protection when it couldn’t achieve it. In his early career as Israel’s minister of defense, and in his negotiations with France and Germany, Peres was instrumental in building Israel’s conventional and strategic military capabilities.

Under his guidance and leadership, Israel solidified its relationship with France, paving the way for the transfer of French warplanes that helped transform the nascent Israeli air force into the regional powerhouse it is today. Peres also played a pivotal role in attaining a nuclear reactor from France, which became the foundation of Israel’s nuclear weapons program.

His unwavering pursuit of peace, security, and prosperity for Israel endeared Peres to his people and garnered worldwide praise and respect.

Today, the international community joins in Israel’s sorrow over the loss of a champion of peace and security and looks to future generations to carry his legacy and his country into the future.