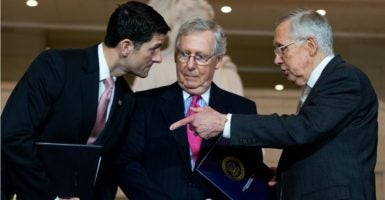 Three days before the federal government’s spending authority expired, the Senate advanced a 10-week continuing resolution by a 72-26 vote, putting spending on autopilot and avoiding a looming government shutdown.

The makeshift spending agreement allows lawmakers in the upper chamber to skip Capitol Hill for the campaign trail with barely a month before the November elections.

The package was scheduled for a 1 a.m. vote Thursday morning in the House and was expected to pass with Democrat support.

The stopgap measure freezes spending at the current $1.07 trillion level for 69 days until Dec. 9. That requires Congress to revisit the issue after the November election but before the next Congress convenes, during the so-called lame-duck session.

Though heralded by Senate leadership as a “clean” continuing resolution, the bill includes a $1.1 billion Zika aid package that would make Planned Parenthood, the nation’s largest abortion provider, eligible for federal funding.

“This [continuing resolution] has plenty of so-called ‘policy riders,’ but only those that received the blessing of the select few who wrote the legislation,” Sen. Mike Lee, R-Utah, said in a statement.

“So it includes a provision that will give Planned Parenthood a raise, but contains nothing to delay President Obama’s reckless plan to give countries like China, Russia, and Iran more control over the internet,” the Utah senator added, referring to the fact that the bill does not prevent the end of U.S. oversight of the internet, set for Oct. 1.

Earlier in the summer, Democrats thwarted three Republican efforts to pass Zika relief packages that prohibited Planned Parenthood from receiving funds. To appease the left and avoid a shutdown, Republicans stripped that language from the bill.

The bill amounts to an across-the-board loss for conservatives in both chambers who have called for lower spending levels and a number of policy riders for over a year.

Both conservatives conceded on that point, telling leadership they could swallow the higher $1.07 trillion spending level in exchange for policy riders that would require additional screening for Syrian refugees and prevent the White House from relinquishing control of Internet Corporation for Assigned Names and Numbers (ICANN).

Neither policy rider was included in the Senate version of the spending bill.

“I understand that you can’t always get everything you want in a spending bill, but this CR [continuing resolution] ignores several essential issues,” Sen. James Lankford, R-Okla., told The Daily Signal Wednesday afternoon.

The legislation almost didn’t come to fruition though.

Tuesday afternoon Senate Democrats blocked similar legislation because it didn’t include emergency relief for Flint, the Michigan city with lead-poisoned water. Failing to win the 60 votes needed to pass, the bill fell 45-55, raising the possibility of a government shutdown.

But Speaker Paul Ryan, R-Wis., and Minority Leader Nancy Pelosi, D-Calif., reached a deal in the House that saved the Senate legislation by tabling the Flint issue until after the election.

The deal requires the House to move an amendment to an infrastructure bill that authorizes $170 million in emergency spending to help relieve the city that’s endured lead in its drinking water since January 2016.

The promised vote on the Flint measure will come after the election.