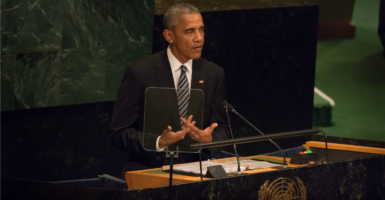 President Barack Obama has been most active in the U.N. when it offered an opportunity to advance his policies that lack broad support among the American public. (Photo: Albin Lohr-Jones/Pacific Press/Newscom)

President Barack Obama gave his eighth and final address to the United Nations General Assembly Tuesday morning. The tone was reminiscent of past speeches in a number of ways, both good and bad.

The rhetoric was soaring in parts and it was well delivered. However, his characterization of the world and his successes tended toward the Pollyannaish and the president’s irritating tendency to focus on himself and air domestic political grievances in international venues detracted from his remarks. At times the president also crossed the line from urging others to see his vision into condescension and lecturing.

As expected, the president touted his accomplishments since first addressing the United Nations in 2009. The White House summarized them thusly:

The end of two wars in the Middle East. A historic nuclear agreement that will prevent Iran from obtaining a nuclear weapon. A global agreement to combat climate change. A normalization of relations with Cuba, Burma, and Laos. An advance of relations with Vietnam. A global coalition to degrade and defeat ISIL. The death of Osama bin Laden. The largest investment by any nation to put an AIDS-free generation well within reach.

These accomplishments are at turns exaggerated (ending wars in the Middle East), delusional (that the agreement will prevent Iran from obtaining a nuclear weapon), incomplete (the extent of climate change is uncertain and the agreement does not do what alarmists say is necessary to mitigate it), hollow (restored relations with Cuba has not changed the regime), irresolute (the ISIL coalition is, at best, fractured), and ungracious (failing to acknowledge the role of the George W. Bush administration in establishing America’s premier AIDs program). Although, to be fair, Osama bin Laden is dead.

Obama has been most active in the U.N. when it offered an opportunity to advance his policies that lack broad support among the American public.

The Obama administration has expressed strong rhetorical support for the U.N. and the president echoed those sentiments frequently in his speech.

However, the past eight years is a record of selective engagement.

This is partially dictated by political reality. Russia’s veto has blocked substantive U.N. Security Council action on Syria or Ukraine. Likewise, China’s power on the Security Council has impeded efforts to effectively bring pressure to bear on North Korea.

However, flaws and weaknesses of the U.N. itself have forced the U.S. to explore alternative options at times. To be blunt, finding consensus among 193 nations is often difficult even for administrations inclined to work through the U.N.

Even where consensus is found, there can be tragic unintended consequences, as illustrated by the U.N. presence in Haiti leading to cholera and U.N. peacekeepers abusing the vulnerable populations they are supposed to protect, that should lead the U.S. and other nations to question whether the U.N. is the best option to address problems.

Unfortunately, the president has been most active in the U.N. when it offered an opportunity to advance his policies that lack broad support among the American public. Most particularly, he has demonstrated a penchant for going to the U.N. to circumvent opposition in Congress. Consider the following:

While the president frequently blames congressional resistance for “forcing” the administration to pursue these options, it is he who has failed to convince Congress and the American people of their merits.

But the strategy might have an unintended victim: the U.N.

The willingness of the U.N. to play along with these partisan games will redound negatively on the U.N. Already, it has increased skepticism and disapproval of the U.N. among conservatives and supporters of congressional prerogatives.

According to Gallup, a strong majority of the U.S. public sees the U.N. as doing a “poor job.”  By enmeshing the U.N. in U.S. partisan politics, Obama may be entrenching this perspective. Further undermining U.S. support for the U.N. may end up being one of Obama’s more lasting legacies