US Has Duty to Ensure Internet Freedom, Cruz Says at Hearing on Obama Plan 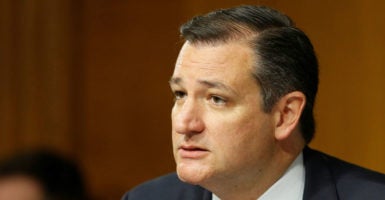 The internet, an “oasis of freedom,” could become much less free if the United States doesn’t keep guardianship over it, Sen. Ted Cruz said Wednesday during a hearing on Capitol Hill.

“The internet is one of the most revolutionary forces ever unleashed on the world,” Cruz, R-Texas, said during the Senate Judiciary subcommittee hearing.

“People even meet and get married through the internet,” he added.

Because of the power of the internet, Cruz and others said, the U.S. should not transfer vital administrative controls to an international body that includes oppressive regimes. One homeland security expert called the Obama administration plan to delegate accountability a “leap in the dark.”

The Obama administration intends to transfer oversight of ICANN to a nongovernmental organization for “the long-term security and wellbeing of the internet,” Josh Earnest, White House press secretary, said Monday at a press briefing. The proposed transition of the internet to global control is set to take place Oct. 1.

Keeping the internet under the control of the United States protects First Amendment rights such as free speech online, Cruz, chairman of the Judiciary subcommittee on oversight, agency action, federal rights and federal courts, said.

“Because of the First Amendment to our Constitution, which affords more protection for speech than anywhere else in the world, the United States government—as long as it has authority to oversee the infrastructure of the internet—has a duty to ensure that no website is denied internet access on account of the ideas it espouses,” Cruz said.

Cruz and Rep. Sean Duffy, R-Wis., introduced the Protecting Internet Freedom Act in June to prevent the National Telecommunications and Information Administration, an agency of the Commerce Department, from allowing an ICANN-related contract to expire at the end of this month.

Lawrence E. Strickling, administrator of the National Telecommunications and Information Administration, urged Congress not to block the transition to a “long-promised privatization” of the domain name system for the internet.

“The best and most effective way to preserve internet freedom is to depend on the community of stakeholders who own and operate, transact business, and exchange information over the myriad of networks that comprise the internet,” Strickling, an appointee of President Barack Obama, testified.

Many conservative groups express concerns over transferring the powers to foreign control.

“Allowing a U.N.-type body to oversee ICANN puts the free speech rights of people around the world at risk,” Rep. Jim Jordan, R-Ohio, said in a prepared statement.

Some are worried this could lead to censorship online.

Sen. Chris Coons, D-Del., ranking member on the subcommittee, noted that the U.S. “does not own the internet.”

Upon questioning from Coons, Göran Marby, CEO and president of ICANN, testified that the internet corporation doesn’t have the ability to censor the internet.

“ICANN, however, cannot and does not use this technical mandate to control what internet users access, do, or say over the internet. ICANN is just one of the entities that performs work necessary to the operation of the internet, and there is no single point of control,” Marby said in prepared testimony.

Relinquishing US #Internet oversight to an international body, not bound by the 1st Amendment, endangers #FreeSpeech pic.twitter.com/8Vk71z8Z90

Some worry that those bylaws could be amended to become less respectful of freedom under a new administrative authority.

Strickling, the Commerce Department official, testified that it would not be effective to continue the existing contract and that doing so could lead to a loss of internet freedoms. He said:

That contract is simply too limited in scope to be a tool for protecting internet freedom. It simply designates ICANN to perform the technical … functions of managing the database of protocol parameters, allocating IP [internet protocol] numbers, and processing changes to the root zone file.

Big technology companies, including Facebook, Google, and Twitter, wrote a letter to Congress in support of transferring technical management of the internet to a global body.

“Just to clarify … if the [internet] transition goes forward … the United States would be on the very same footing as would Russia or Iran or China?” Cruz questioned Strickling.

Cruz and Duffy’s legislation, which would not let the existing contract lapse without an act of Congress, has 32 co-sponsors, including original Senate co-sponsors Sens. Mike Lee, R-Utah, and James Lankford, R-Okla.

Lankford has called the Obama administration’s proposal an “internet giveaway” that he will try to stop.

We believe rushing the transition through now in its current state will endanger manufacturers’ rights to their trademarked brand names, severely disadvantage states’ rights, jeopardize national security, and prevent the safeguarding of the internet freedoms we have come to depend on.

“My hope is that Congress will intervene to safeguard the free and open internet for the use of the world, and hold Commerce to actively oversee ICANN’s activity and help repair its faulty structure in the waning hours when it still has time and authority to do so,” Grove added, referring to the Commerce Department in prepared testimony.

Paul Rosenzweig, former deputy assistant secretary for policy at the Department of Homeland Security, testified that he favors the transition, but “as it’s drafted now, the accountability side of this is a leap in the dark.” He suggested a plan that would include a trial period before a formal transition.

“Nobody can reasonably tell you that there is certainty about how it will work out,” Rosenzweig, a homeland security consultant who is a former legal research fellow at The Heritage Foundation, said in prepared testimony. “Yet the safe and secure functioning of the network is vital to economic and political freedom around the globe.”

Under questioning by Cruz, Rosenzweig testified that, in his opinion, under the Obama administration’s proposed transition the United States would lose power and all foreign governments would gain power.