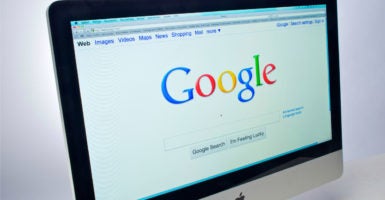 “The internet has become the foundation of international commerce for one reason,” the Conservative Action Project says. “It operates under the protection of American legal, cultural, and political freedoms.” (Photo: Caro/Klaus Westermann /Newscom)

Members of Congress need to be held individually responsible if they allow President Barack Obama to hand the internet over to international control next month, over 100 conservative leaders say.

“On October 1, 2016, President Barack Obama will hand to Iran, China, Russia, and others control of perhaps America’s single greatest strategic asset—the World Wide Web known as the internet,” a memo from the Conservative Action Project says.

The Conservative Action Project, chaired by Becky Norton Dunlop, the Ronald Reagan distinguished fellow at The Heritage Foundation and former Reagan White House adviser, was founded in 2008 by many conservative leaders.

“The internet has become the foundation of international commerce for one reason,” the group wrote in the Monday memo. “It operates under the protection of American legal, cultural, and political freedoms.”

The Obama administration announced a plan in 2014 to transition the internet to global control. Obama has twice signed legislation passed by Congress to prevent the administration from using funds to transfer “the internet to foreign control,” according to the Conservative Action Project.

“Forces around the globe desire to control” the internet and to “shut down its fairness,” the memo says.

Sen. Ted Cruz, R-Texas, and Rep. Sean Duffy, R-Wis., introduced legislation this summer, the Protecting Internet Freedom Act, to prevent the National Telecommunications and Information Administration from allowing the Internet Assigned Numbers Authority functions contract to expire at the end of this month. The contract gives the United States government “exclusive control and use of those domains in perpetuity.”

“Perhaps none of Mr. Obama’s actions during his two terms will do as irreparable damage to our national security as his transferring the Internet Assigned Numbers Authority (IANA) functions to the foreign government-controlled Internet Corporations for Assigned Names and Numbers (ICANN) on October 1, 2016,” the memo says.

“Imagine searching the internet and instead of seeing your standard search results, you see a disclaimer that the information you were searching for is censored,” Cruz said from the Senate floor last week. “It is not consistent with the standards of this new international body, it does not meet their approval.”

Cruz and Duffy’s legislation “will ensure that the United States maintains sole ownership of the .gov and .mil top-level domains, which are vital to national security,” according to the memo.

“I don’t want you and I to have to tell our children and our children’s children what it was once like when the internet wasn’t censored,” —@SenTedCruz

“The Department of Defense, the Army, the Navy, the Air Force, the Marines all use the .mil top-level domain. The White House, the CIA, the FBI, the Department of Homeland Security all use .gov,” Cruz said. He added:

I don’t want you and I to have to tell our children and our children’s children what it was once like when the internet wasn’t censored, wasn’t in the control of the foreign governments.

The Conservative Action Project threatens to hold every member of Congress responsible if they don’t take action before Oct. 1.

“No other nation would even consider discarding such a valuable strategic asset,” the memo says.