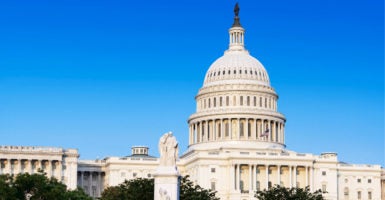 It seems straightforward to demand that Congress consider how much taxpayers will face in interest costs in order to assess how much a given proposal will truly cost over time. Yet, that is not how Congress works. (Photo: John Greim John/Greim Photography/Newscom)

Before committing to legislation that will increase deficits, Congress should evaluate interest costs to see how much a proposal will truly cost over time.

Interest costs are an important factor to consider before spending more than one takes in. Families and individuals factor in interest costs when evaluating how much a loan will cost them in the long run, and compare this to their personal budgets to make sure the loan is affordable. The same principle should apply to the federal government.

It seems straightforward to demand that Congress consider how much taxpayers will face in interest costs in order to assess how much a given proposal will truly cost over time. Yet, that is not how Congress works.

Currently, when lawmakers compare potential legislation to the baseline, they are not comparing apples to apples. As an example, consider the American Recovery and Reinvestment Act of 2009. Without including debt servicing costs, the bill cost $816 billion. Yet, this cost estimate did not include an additional $347 billion in interest costs over the course of 10 years. So when Congress evaluated the impact the bill would have on the budget, it was missing a significant piece of information.

Interest costs are an important factor to consider before spending more than one takes in.

Cost estimates for legislative proposals, otherwise known as congressional scores, are important because they show Congress the impact that legislation will have on the budget before the House or Senate votes on it. Scoring tells Congress if a proposal will increase mandatory spending or affect taxes and whether it will be subject to budget enforcement legislation.

To judge whether a proposal will increase deficits, the Congressional Budget Office compares the proposal to its baseline. The CBO baseline is a projection of federal spending and revenue based on current law estimates of program spending, interest rates, inflation, and economic growth.

When legislative proposals are evaluated against the baseline, lawmakers can see how a proposed law would impact the federal budget as a whole. This is a useful tool.

But congressional scorekeeping could be improved. One key feature of the CBO baseline is the inclusion of debt servicing costs, or net interest. Yet, scoring of individual legislation does not currently include these interest costs. To improve accuracy, Romina Boccia, The Heritage Foundation’s Grover M. Hermann research fellow, recommends in a new backgrounder that Congress include the debt service cost with every legislative cost estimate.

Interest on the Debt to Triple Adding debt servicing costs to congressional scorekeeping won’t just increase accuracy, it could also keep Congress from overspending. When Congress does not consider the true cost of a proposal, it is more likely to make more costly decisions than it otherwise would. By including interest costs in legislative cost estimates, lawmakers could become more wary of large spending bills.

As it stands, Congress uses a lot of budget gimmicks to enact new spending. Lawmakers often push for new spending with the promise of savings in the future, yet, those savings rarely, if ever, materialize. And even if promised savings eventually do materialize, the proposal still increases the deficit if interest costs are not offset. This gimmick is called “spend now, save later.”

Adding debt servicing costs to congressional scorekeeping would be a simple and quick process. In fact, this fix is something that Congress could make immediately. Virginia Rep. Dave Brat’s Cost Estimates Reform Act of 2015 has been introduced in Congress—passing this reform would be a key first step. Moreover, congressional budget committees should request that the CBO include debt service costs in all scores. Amending the Congressional Budget Act of 1974 would codify this simple change.

Of course, reforming massive government spending and reining in the national debt will take more than a quick fix, but there are small steps we can take in the right direction now. Including debt service costs in congressional scoring is a remarkably simple and quick step, one we should encourage our lawmakers to take.