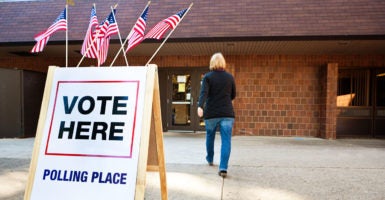 A federal appeals court is reviewing a Kansas law requiring would-be voters to prove they are citizens when registering at motor vehicle offices. “There is a huge potential for aliens’ votes to swing a close election," Kansas Secretary of State Kris Kobach tells The Daily Signal. (Photo: iStock Photos)

With the presidential election two months away, a Kansas law requiring voters to show proof of citizenship remains in legal limbo.

Late last month, Kansas Secretary of State Kris Kobach asked a U.S. appeals court to reinstate a provision of a law requiring Kansans to prove their citizenship when registering to vote while obtaining driver’s licenses.

Kobach, a conservative crusader in a movement in Republican-led states to toughen voting laws, wants the 10th Circuit Court of Appeals to overturn a ruling by a federal judge in May. The judge’s decision temporarily restored voting rights to about 18,000 individuals who, as of the ruling, had registered to vote at motor vehicle offices without providing citizenship paperwork.

Kobach estimates that 18,000 will swell by November to about 50,000 potential voters who haven’t proven citizenship, so the appeals court decision will determine the fate of their votes.

He views the Kansas law as a guard against illegal immigrants voting.

“There is a huge potential for aliens’ votes to swing a close election,” Kobach told The Daily Signal in a phone interview. “Even if it’s just a handful of votes, it’s still a huge injustice. Every time an alien votes, it effectively cancels out a vote of a U.S. citizen.”

“We have law-breaking when it comes to elections, and solving the problem is not difficult,” @KansasSOS says.

Since 2013, Kansas has required voters to provide proof of citizenship when voting—whether they are applying at a motor vehicle office or elsewhere in the state—by showing birth certificates, passports, or naturalization papers.

Kansas is one of four states—the others are Alabama, Arizona and Georgia—to have adopted laws requiring proof of citizenship during voter registration.

In February, the American Civil Liberties Union filed suit on behalf of the League of Women Voters and individual Kansans who said they were left off the voter rolls after registering at the state’s Department of Motor Vehicles.

The ACLU lawsuit specifically targets the issue of Kansas’ requiring proof of citizenship from those registering to vote at the DMV.

The plaintiffs argue that the Kansas law violates the National Voter Registration Act of 1993, particularly a provision that requires states to offer people the opportunity to register to vote when they get a driver’s license. That section says that those who register to vote in this way can be asked only for “minimal information,” allowing them to simply affirm that they are citizens—under the threat of perjury if they lie.

The federal law does not require registrants to bring more documentation than they would need to get a driver’s license. He argues that federal law doesn’t expressly bar states from asking for documentation proving citizenship for people registering to vote at the DMV.

“If a state wants to ask for proof of citizenship, nothing in the law prevents it,” Kobach said. “The absurdity of the legal argument that the ACLU is advancing is this notion that Congress intended to present a special privilege for people registering to vote at the DMV that other people don’t get to enjoy.”

But the ACLU counters that, under the Kansas proof of citizenship law, people who register to vote at the DMV are not always told that they have to provide additional paperwork to get on the voter rolls. These people only learn later on—after they thought they had registered successfully—that they actually were blocked from voting.

Critics also note that Kansas identified to the court only three cases of noncitizens who voted between 2003 and the implementation of the law in 2013.

“We do not have proof of fraud in Kansas,” Marge Ahrens, co-president of the League of Women Voters of Kansas, told The Daily Signal in a phone interview, adding:

We do not have illegal persons who want to vote. It’s the last thing illegal people would want to do. I do think it appeals to our sense of fear, but we just can’t find the evidence to support these laws.

Like other opponents of tougher voter identification laws, Ahrens contends that such requirements disenfranchise poor citizens who may not have the money or means to obtain documentation easily.

The League of Women Voters generally focuses its voter registration efforts on people 60 years or older. Ahrens says the elderly encounter similar challenges in trying to meet the requirements of Kansas’ proof of citizenship law.

“Older people can be stymied just by the idea of trying to pull together documents that may or may not exist,” Ahrens said. “Under this law, the complexity of the voting process has become so difficult that we really cannot do our work in a way that is effective.”

In response to these concerns, Kobach notes that Kansas eases the registration process by allowing voters to fax, email, or text a copy of their birth certificate to the DMV.

Kobach said he expects a decision from the 10th Circuit Court of Appeals before the Nov. 8 presidential election. Even if a decision comes close to the election, he says, his state has contingency plans no matter the ruling.

Voters subject to U.S. District Judge Julie Robinson’s May 17 ruling—those who registered at the DMV since 2013 but haven’t provided proof of citizenship—will vote with provisional ballots and whether they’re counted won’t be decided until after Election Day.

While he acknowledged a wave of recent court rulings against voter identification laws in the states, Kobach said he intends to continue his push for stronger legal provisions, and will appeal to the Supreme Court if he loses.

“This about the rule of law,” Kobach said. “We have law-breaking when it comes to elections, and solving the problem is not difficult.”