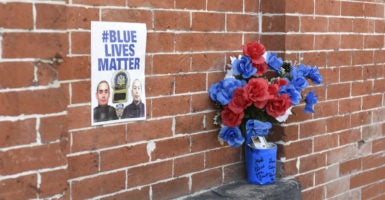 Following the Dec. 20, 2014, ambush murders of New York Police Department Officers Wenjian Liu and Rafael Ramos, police officers and their supporters called upon Congress and the Obama administration to take action to help reduce the likelihood of similar events occurring in the future.

A clarion call was struck for Congress to enact the Rafael Ramos and Wenjian Liu National Blue Alert Act of 2015, a nationwide infrastructure of alert systems similar to the type employed in a variety of states throughout the country.

Much like the Amber Alert or Silver Alert systems, which inform the public of incidents of child abductions and missing or at-risk elderly individuals, respectively, the Blue Alert system was meant to alert members of the law enforcement community to threats seen as particularly important for the safety of police officers nationwide.

The hope was to allow information to be disseminated quickly enough that officers could protect themselves against oncoming threats.

Surprisingly, unlike a majority of ideas floating around Congress, support for a nationwide Blue Alert system was near universal and the legislation breezed through both houses of congress on a voice vote.

The Obama administration swiftly signed the bill into law on May 19, 2015—less than six months from the date of the murders of Liu and Ramos.

More than a year after the Blue Alert Act was signed into law, it continues to languish in a sea of bureaucratic inaction.

With legislation enjoying the broad support of both Democrats and Republicans and signed into law by an effusive President Barack Obama, we can report that the law enforcement community has become safer and more insulated from the threat of ambush attacks, right? Wrong.

Now, more than a year after the Blue Alert Act was signed into law, it continues to languish in a sea of bureaucratic inaction, without implementation.

And while the Obama administration dithers on getting the Blue Alert system in place and active, more and more police officers find themselves at risk and the target of an emboldened criminal element.

Why the hesitation or indecisiveness on the part of the Obama administration in implementing the Blue Alert system? How has it taken so long to enact a system that has otherwise been in use for years in 27 states and counting?

This time, the answer may not surprise you.

According to a statement provided to USA Today, the Obama Justice Department claimed it had taken over a year to merely determine which office within the DOJ should be responsible for implementing the program.

But in an era of heightened anti-police rhetoric and ever ubiquitous violent attacks against the men and women of law enforcement, the Obama administration has no excuse but to make the full implementation of a nationwide Blue Alert system an absolute priority.