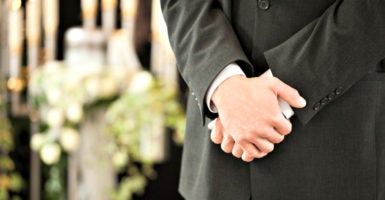 A federal agency wants a funeral home to rehire a transgender woman and allow the employee to wear a woman’s uniform as a funeral director, or to pay damages. (Photo: iStock Photos)

The owner of three Michigan funeral homes is defending his right to require employees to dress on the job according to their biological sex, in a federal case brought on behalf of a transgender woman who used to work as a funeral director.

“Mr. Rost feels called by his faith to serve the grieving.” —@doug_wardlow @AllianceDefends

Thomas Rost, president and owner of RG & GR Harris Funeral Homes, “is a devout Christian … and his faith informs the way he operates his business and how he presents his business to the public,” his lawyers say in court documents.

The sex-specific dress code for funeral directors and other employees reflects Rost’s wish to respect grieving families as well as his belief that men and women are different, his lawyers with the Christian legal aid group Alliance Defending Freedom argue.

The U.S. District Court for the Eastern District of Michigan in Detroit heard arguments Aug. 11 in the lawsuit, in which the Equal Employment Opportunity Commission argues that the funeral director was fired as the result of discrimination.

The Equal Employment Opportunity Commission sued Rost’s funeral homes in September 2014 after the business fired the employee, born male, for intent not to comply with the dress code at the Garden City, Michigan, location.

Harris Funeral Homes hired Anthony Stephens, now Aimee Stephens, in 2007 as a funeral director and embalmer. In 2013, Stephens gave his employer a letter explaining that he was undergoing a gender transition and would start dressing as a female at work, according to the EEOC.

Rost “feels called by his faith to serve the grieving,” Douglas Wardlow, legal counsel at Alliance Defending Freedom, told The Daily Signal in a telephone interview after the hearing. “He has [a] dress code in place because of his religious beliefs about human sexuality, and that is that one’s sex, male or female, has God-given gifts and it should not be changed and cannot be changed.”

That belief was burdened substantially by the EEOC’s attempt here to force the company to permit Stephens, the concerned employee, to wear a uniform for a female employee while on the job that represents the funeral home.

The EEOC, which filed an amended complaint in June 2015, argues that Harris Funeral Homes discriminated against Stephens because the former employee “did not conform to the employer’s gender-based expectations, preferences, or stereotypes,” according to a press release from the federal agency.

“The former employee who filed a complaint with the EEOC was at all times free to dress as desired outside of work,” Caleb Dalton, another legal counsel at Alliance Defending Freedom, said in a prepared statement in April. “But [Stephens] was required, as all other employees are, to abide by the dress policy while on the job.”

The EEOC’s litigation is an attempt to force the funeral home either to rehire Stephens and allow Stephens to wear women’s clothing, or to pay unspecified damages for failing to do so, Wardlow told The Daily Signal.

The dress code at Harris Funeral Homes is “an industry standard dress code,” Wardlow said, and is both “legitimate” and legal.

He said the dress code requires “professional, conservative dress that reflects the somber and solemn nature of what’s going on in the funeral home,” and that “men and women dress as men and women.”

“Title VII, the law that prohibits discrimination based on sex in employment, does not cover transgender status,” Wardlow told The Daily Signal.

Expanding Title VII of the Civil Rights Act of 1964 through interpretation to include transgender identity or status “would basically give [transgender individuals] special protection status under law,” he said.

The Equal Employment Opportunity Commission has not responded to The Daily Signal’s email and phone call requesting comment.