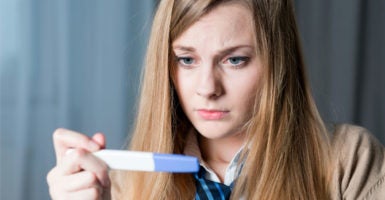 As a result of this decision by the Alaska Supreme Court, instead of receiving counsel from their parents, minors may be pressured into making a life-altering decision and forced to hide any emotional or physical struggles from their parents after the fact. (Photo: iStock Photos)

Hillary Kieft grew worried when her daughter didn’t arrive from school on the bus as usual. After she called the school to find out what was wrong, a school nurse pulled into her driveway with the daughter (let’s call her “Kelly”) in tow. The nurse explained that she had taken Kelly for counseling after school, according to LifeNews.com, which reported on the Kieft story.

But, in fact, the nurse took Kelly to have an abortion.

In New Zealand—where the Kieft family lives—it is completely legal for a minor to have an abortion without her parents’ knowledge. Parents like Hillary Kieft have no legal right to be involved in their child’s decision to have an abortion, or even to be notified before it happens.

With her parents still unaware of the abortion, 15-year-old Kelly spiraled into depression, self-harm, and eventually attempted suicide. It was only when Kelly finally told her parents about the abortion that they could begin helping her cope—not only with the abortion, but also with the sad reality that the procedure had caused irreparable damage and she would never be able to become pregnant again.

As a LifeNews.com article about Kelly points out:

The fact that a school needs permission to take your child on a field trip, but not for surgery, is beyond ridiculous. The same teen needs parental consent before getting a tattoo or using a tanning salon … Has abortion really become such a taboo subject that we are willing to just ignore all legal oversights rather than face the wrath of abortion advocates?

Fortunately, in the United States, most states have parental consent or notification laws.

Generally speaking, the law reflects the fact that parents are responsible for the well-being of their children, and are most likely to have their best interests in mind. That’s why parents have to sign waivers for almost any medical care for their children.

But this just changed for Alaskan families, thanks to a lawsuit brought by Planned Parenthood attacking the state’s parental notification law.

Alaska law required that minors seeking an abortion notify their parents unless they receive approval from a court (known as a judicial bypass). This notification requirement was intended to foster parental involvement in such a life-changing decision.

The state argued that its interests in requiring notification include encouraging parents to be involved in their minor child’s decision whether to have an abortion, protecting the physical and mental health of minors, and preventing sexual abuse.

In a 4-1 decision last month, the Alaska Supreme Court concluded that the state’s notification law violated the Alaska Constitution’s equal protection clause because it drew an unjustified “distinction between pregnant minors seeking to terminate and those seeking to carry to term.”

Essentially, the majority ruled that the law is unfair because it required parental notification for abortion but not for care related to maintaining a healthy pregnancy until birth. It is true that Alaska allows pregnant teens to receive pregnancy-related health care without parental consent; otherwise many young girls might avoid obtaining needed care.

But, Justice Craig Stowers, the lone dissenter, explained, the law “necessarily differentiates between minors seeking an abortion and minors who intend to carry to term” because mandating parental notification before a minor can receive prenatal care may threaten the health of the mother and the growing child. Stowers observed that “no useful purpose is served by … requiring parental consultation for carry-to-term decisions.”

Stowers also wrote that providing parents with an opportunity to discuss the consequences of abortion with their child is both a clearly valid reason for the law, and completely in line with U.S. Supreme Court decisions like Planned Parenthood of Southeastern Pennsylvania v. Casey (1992).

The law is necessary, he pointed out, to ensure that “the people society holds responsible for her well-being—her parents—will be informed of what is happening in her life.” He noted that previous cases from this very court said that parental notification requirements would further the compelling interest of parental involvement. But the majority now “undermines the parents’ rights and responsibilities in this regard and makes a mockery of its earlier proclamations of the proper and fundamental role parents have traditionally played in their children’s lives,” Stowers writes.

Stowers further noted that the law does not stop a minor from obtaining an abortion against her parents’ will. It only requires that they know, which gives them a chance to exercise their right and responsibility of involvement in their daughter’s life. The law even created an “easily navigable, broad bypass process” that would allow a judge to approve an abortion for the minor without parental notification.

The bottom line is that parents, rather than abortion clinic staff or school nurses, deserve the right to be involved in their minor daughter’s decision whether to terminate her pregnancy. After all, clinics are businesses that do not necessarily prioritize the health and safety of patients over their ability to turn a profit—just look at the conditions of some clinics that were so bad that many states have passed reforms in recent years aimed at increasing the standards at clinics.

As a result of this decision by the Alaska Supreme Court, instead of receiving counsel from their parents, minors may be pressured into making a life-altering decision and forced to hide any emotional or physical struggles from their parents after the fact. Eliminating parental notification is a step in the wrong direction and harms, rather than helps, girls like Kelly.