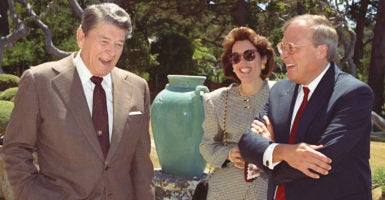 At a time when many Americans say the nation is headed in the wrong direction and the American dream seems increasingly improbable, who better to turn to for counsel and comfort than Ed Feulner, the founder of The Heritage Foundation, who celebrates his 75th birthday Friday?

“I’m always the optimist,” Ed admits. “I’m the congenital optimist in Washington and in the conservative movement.” He traces his optimism in large part to what former President Ronald Reagan often said, “Trust the people.” Heritage has always trusted the people, he says, and never stops looking for ways to inform the people, rouse the people, inspire the people. “If we do that,” Ed says, the people will respond by reminding Washington of another Reagan insight: “We are not a government with a people. We are a people with a government.” Ed Feulner and President Ronald Reagan are flanked by Rose and Milton Friedman in 1986. (Photo: Charles Geer for The Heritage Foundation)

Ed once wrote that “we must work not just to roll back the welfare state but to transcend the welfare state.” That will happen, he said, not with “one mighty burst of legislation or a single dramatic event like the fall of the Berlin Wall” but through a series of discrete acts by:

•Intellectuals with the courage to speak truth to power.

•Ordinary people who take responsibility for themselves and their families.

•Religious and community leaders who uphold and pass on their faith and example.

•Political leaders who love freedom and know that the common man can manage his own life better than any government can. Ed Feulner at the Berlin Wall. (Photo courtesy of The Heritage Foundation)

Those who wish to take an in-depth look into the life of this longtime conservative movement leader can read about Ed in my book, “Leading the Way: The Remarkable Story of Ed Feulner and The Heritage Foundation.” So, many thanks, Ed Feulner, for all you have done and continue to do for conservatism and for America. Happy 75th and many more to come!