These Tax Code Changes Could Save Average American Families Around $4,000 a Year 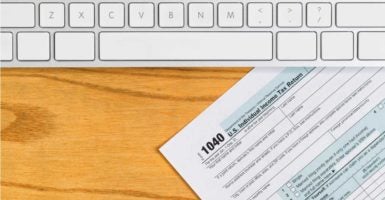 Reece Brown is a member of the Young Leaders Program at The Heritage Foundation.

It’s a nuisance when an ATM charges you money to take money out. Imagine having to pay 31 cents for every dollar you withdraw. That’s how much it costs U.S. businesses to comply with the byzantine corporate income tax code.

Taxpayers—businesses and individuals—are spending an enormous amount of time and money simply figuring out how much they have to pay in taxes—not to mention the money they then end up paying. Compliance expenses are a charge on a charge, and they cost taxpayers without benefiting the public treasury.

A new study published by the Tax Foundation, a tax policy research organization, estimated the costs of U.S. tax code complexity. The study also confirmed that the code is growing in length and complexity. Most taxpayers and businesses now hire professionals to file their taxes for them as the number of words published by the IRS (not including the tax code itself) has grown to a frightening 7.7 million.

Using data from the Office of Information and Regulatory Affairs, the Tax Foundation estimated that “Americans will spend more than 8.9 billion hours complying with IRS tax regulations in 2016.”

Every dollar that a business has to spend on compliance expenses is one less dollar to spend on new projects, technology, or wages. The Tax Foundation concludes that “in dollar terms, the 8.9 billion hours needed to comply with the tax code computes to $409 billion each year in lost productivity, or greater than the gross product of 36 states.”

A Heritage Foundation study last year estimated that reforms to business income taxes alone save the average American family $230 a year. That’s just one of a dozen regulatory changes the study proposed, which together could save an average family $4,440 a year. Household budgets and wage growth are being weighed down by regulatory costs in housing, transportation, food, and elsewhere.

These obstructive policies hurt the economy by limiting its growth and potential, and decrease the general welfare by taking the life out of vibrant, healthy taxpayer budgets.

Tax complexity is a charge on a charge. The billions of dollars wasted in complying with taxes aren’t even the trillions that the IRS collects from taxpayers each year. If you plan ahead, you can save money by not having to use an ATM that charges you to withdraw. Likewise, with sensible reforms, the government could save Americans money and promote growth by simplifying the tax code.