Knife Rights: The Unseen Side of the Second Amendment 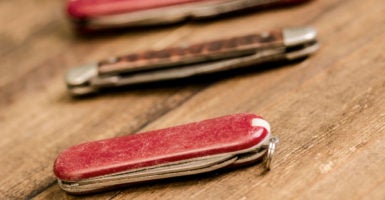 While congressional Democrats and Republicans go head-to-head over gun control, proponents of a smaller, often overlooked facet of the Second Amendment’s right to keep and bear arms pursue a battle of their own—the right to carry a knife.

Knife Rights, an Arizona-based advocacy group aimed at ridding states of existing bans on specific types of knives, is leading the fight against restrictive knife laws across the U.S.

“Protecting knife rights is the second front in the defense of the Second Amendment,” Todd Rathner, director of legislative affairs at Knife Rights, told The Daily Signal.

The group also seeks passage of “knife law preemption,” which essentially removes local and county restrictions that conflict with state laws on using and carrying knives.

Protecting knife rights is the second front in the defense of the Second Amendment.
—@ToddRathner

Doug Ritter, founder and chairman of Knife Rights, noted an “interesting contrast between our fight versus the gun rights fight because we generally receive a significant amount of bipartisan support for our bills.”

“We have had a number of NRA F-rated members supporting our bills,” Ritter said, referring to lawmakers in Congress and state legislatures with low scores on gun rights from the National Rifle Association.

That support, he said, made it possible for the group to successfully pass 21 bills in 15 states, all in the past seven years.

“There’s a large group of traditional Democrats saying people shouldn’t get arrested for using a pocketknife as an everyday tool,” Rathner said. “To put it simply, we’ve got to stop arresting people for using a tool.”

After Knife Rights successfully lobbied to pass knife law preemption in Arizona, Utah, and New Hampshire, as well as legalize switchblades in New Hampshire, the group decided to take on Texas.

Rathner said Texas was a daunting legislative body to his small team, but before they could visit Second Amendment sympathizers in the Texas House, state Rep. Harold Dutton Jr., D-Houston, proposed a bill of his own.

In February 2013, Dutton filed H.B. 1862, which, when passed, repealed the statewide ban on switchblade pocket knives.

When Rathner asked Dutton what motivated him to make pro-knife strides, the representative emphasized the need to reduce the amount of conflicts between his constituents and law enforcement officers.

Rathner recalls Dutton questioning why someone has the right to walk into a store and purchase an AR-15 rifle legally, but is subject to arrest if he or she does the same with a switchblade.

New York state legislators also are fighting, and winning, the battle to rewrite knife laws by redefining the term “gravity knife” to protect common pocket knives, including knives with what is called bias toward closure.

According to Knife Rights, these knives have a safety mechanism that “prevents the blade from opening in your pocket” and account for about 80 percent of common pocket knives in the U.S.

Knives with a bias toward closure are not classified as gravity knives because they require “exertion applied to the blade by hand, wrist, or arm” to open the knife.

Essentially, the issue is that gravity knives, as everyone understands them, are a specific kind of knife, but the New York City Police Department and District Attorney Cyrus Vance Jr. are trying to stretch that definition to cover the common folding knives that people carry in their pockets every day. In an attempt to remedy that situation, the bill and our lawsuit would clarify that these common folding knives are not the gravity knives that [the] legislature was trying to restrict back in the 1950s.

New York banned gravity knives because they are considered a weapon—a foot-long knife that could be wielded with a flick of the wrist. Gravity knives, in the original sense, are rarely manufactured today.

Because of an outdated law, electricians, carpenters, and construction workers have been arrested for carrying a workplace tool on their person.

According to the Village Voice in 2014, “there have been as many as 60,000 gravity-knife prosecutions over the past decade, and … the rate has more than doubled in that time. If those estimates are correct, it’s enough to place gravity-knife offenses among the top 10 most prosecuted crimes in New York City.”

“Nowhere else do we see this organized persecution of pocket-knife owners. That’s been an ongoing, five-year effort to stop it,” Ritter said.

After two years of passing in the Democrat-controlled state assembly and failing in the Republican-controlled Senate, the bill to redefine the gravity knife and legalize the common pocket knife passed both assembly and Senate. Gov. Andrew Cuomo has until the end of the year to either veto or sign the bill.

“It really is fascinating how Democrats are waking up to this issue and realizing that it is a civil rights issue,” Rathner said.