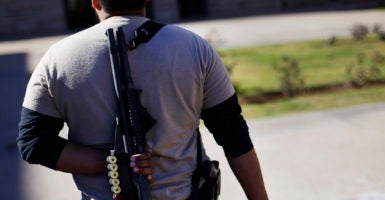 The owner of a Remington 870 Express 12-gauge shotgun attends a pro-Second Amendment rally in January 2013 outside the Arizona state Capitol in Phoenix. (Photo: Joshua Lott/Reuters/Newscom)

President Donald Trump vowed emphatically in a tweet Wednesday that “the Second Amendment will never be repealed,” the day after publication of a retired Supreme Court justice’s commentary in favor of doing just that.

“As much as Democrats would like to see this happen … NO WAY,” Trump tweeted.

The president added: “We need more Republicans in 2018 and must ALWAYS hold the Supreme Court!”

THE SECOND AMENDMENT WILL NEVER BE REPEALED! As much as Democrats would like to see this happen, and despite the words yesterday of former Supreme Court Justice Stevens, NO WAY. We need more Republicans in 2018 and must ALWAYS hold the Supreme Court!

Stevens, who will turn 98 on April 20, contended that concerns about a tyrannical government—one of the reasons the Founders included the right to bear arms in the Bill of Rights of the Constitution—are “a relic of the 18th century.”

Since a 19-year-old with a rifle killed 17 and wounded 17 others Feb. 14 at a Parkland, Florida, high school, gun control again has been the topic of heated debate. That debate intensified in the wake of the March for Our Lives rallies Saturday in Washington and around the nation.

In the op-ed, Stevens expressed his support for the March for Our Lives protest, saying, “These demonstrations demand our respect.”

Nominated to the high court in 1975 by President Gerald Ford, a Republican, Stevens proved to be part of the court’s liberal bloc in his service of more than 34 years.

Dick Heller challenged a decades-old law in the District banning individuals from owning handguns except for those registered before 1975. The law also required D.C. residents’ rifles and shotguns to be kept unloaded and disassembled, or bound by a trigger lock.

Stevens, who retired from the court in 2010, was one of four dissenters in the justices’ Heller decision, which found that Americans have an individual right to bear arms.

“Overturning that decision via a constitutional amendment to get rid of the Second Amendment would be simple and would do more to weaken the [National Rifle Association’s] ability to stymie legislative debate and block constructive gun-control legislation than any other available option,” Stevens wrote in the Times.

According to Article V of the Constitution, repealing the Second Amendment would require support from two-thirds of the House and the Senate, and ratification from three-fourths of the state legislatures, 26 of which are controlled by the GOP.

Or two-thirds of the states could call for a constitutional convention, which has happened only once since the Founding, to ratify the 21st Amendment.

On Tuesday, reporters asked White House press secretary Sarah Huckabee Sanders whether Trump would favor repealing the Second Amendment or instead supported it.

“Does the White House feel there’s any chance that that kind of movement [to repeal the Second Amendment] could take hold in Washington?” one reporter asked.

The president and his administration “still fully support the Second Amendment,” Sanders said.

“We think the focus has to remain removing weapons from dangerous people and not blocking all people from their constitutional rights,” she said.