In Cleveland, GOP Governors Up Commitments to Criminal Justice Reform 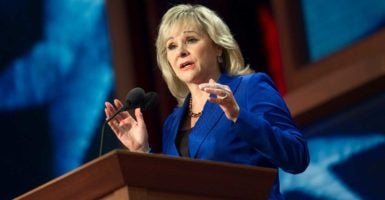 “It’s not a Republican or a Democrat issue. It’s an American issue we should all be concerned about,” Oklahoma Gov. Mary Fallin says. (Photo: Chris Maddaloni/CQ Roll Call/Newscom)

On the second day of the Republican National Convention here, Govs. Matt Bevin of Kentucky, Nathan Deal of Georgia, and Mary Fallin of Oklahoma touted reforms passed in their states assisting nonviolent offenders, juveniles in the justice system, and incarcerated women.

“The rule of law is the responsibility of government,” Bevin told reporters after an event  Tuesday morning. “I think if we focus that rule on where it is most needed so we are arresting the people that truly need to be arrested, and incarcerating the people who truly need to be incarcerated, separating from the rest of society those who are truly a danger to society, everything we’re calling for will allow us to focus more like a laser on [the rule of law], and society would be safer.”

At the state level, Republican governors have signed legislation aimed at lowering the number of people incarcerated in an effort to not only reunite families and lower recidivism rates, but also cut state budgets.

In Georgia, for example, Deal recalled how his state was the 10th largest in the country in terms of population, but had the fourth largest prison population—a statistic that both surprised and worried him.

Additionally, with 56,000 Georgians in prison, he was told that the state needed to build two new adult prisons costing $264 million—a figure much higher in Bevin’s state, the Kentucky governor said.

Deal and the Georgia state legislature first reformed sentencing for nonviolent offenders, diverting those to accountability courts. He then reformed the juvenile justice system and worked with private partners to help prisoners up for parole secure jobs once they are released.

“I believe a Republican point of view shows that Republicans are not what many people paint us to be, the lock them up and throw away the key party,” Deal said. “The whole purpose of government, one of the main purposes, is to keep people safe. We know the old methods weren’t doing that.”

The U.S. Justice Action Network, which hosted the event in Cleveland, targeted 12 states for criminal justice reform. In 11 of those states, legislatures passed reform bills.

Though support for criminal justice reform crosses party lines, with support coming from Democrats like Sen. Cory Booker of New Jersey and Republicans like Sen. Mike Lee of Utah, the GOP still has its skeptics.

Influential conservative senators Tom Cotton of Arkansas, Ted Cruz of Texas, and Jeff Sessions of Alabama have warned that a reduction in mandatory minimum sentencing, a cornerstone of criminal justice reform introduced in both the House and Senate, would make communities less instead of more safe.

But Bevin bucked the notion that criminal justice reform is an issue that has the party split between those for and against reform legislation.

“That’s a false narrative perpetuated by many who would love for that discord to be true,” the Kentucky governor told delegates Tuesday. “This is not a partisan issue. This is a human issue. Dignity transcends party.”

Bevin instead pointed to inclusion of criminal justice reform in the party’s 2016 platform, passed at the Republican National Convention yesterday, as proof that the GOP is committed to the cause.

Indeed, the party’s platform called for the creation of a task force to “purge the code” of crimes to tackle overcriminalization. The document also advocates for modifications to mandatory minimum sentencing for nonviolent offenders; those who struggle with addiction and those with mental health issues.

“It’s not a Republican or a Democrat issue. It’s an American issue we should all be concerned about,” Fallin said. “I think we’re seeing a movement among our nation of leadership and talking about how we can help people who have substance abuse and how we can work with community programs to help people get back on their feet.”