Why Democrats Are Really Blocking Funding to Fight Zika Virus 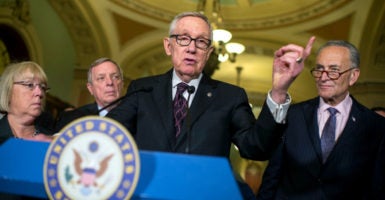 The hypocrisy of Democrats in Congress when it comes to combatting the Zika virus is not only outrageous, it’s dangerous.

The latest data from the Centers for Disease Control and Prevention say there are now over 2,600 cases of the Zika virus confirmed in the United States and its territories. Most cases are occurring in Puerto Rico, but there are at least 162 cases in Florida and 198 in New York. And scariest of all is that over 450 of the reported cases are pregnant women. It is their unborn children for which the disease poses the greatest harm.

Despite the fact there is plenty of money scattered across the federal government that could be used without Congress adding another dime to the debt, Democrats have made the decision to hold hostage the health of the American people until they get more money and until some of those dollars are given to Planned Parenthood.

Back in May, House Republicans balked at such a high number but changed their minds saying they had found “savings” from other government programs to offset the spending. They passed a bill last week at the $1.1 billion level.

But what the GOP calls “savings,” Democrats call “cuts” and will not support the measure unless it’s all additional spending.

I asked my Heritage Foundation colleague and senior policy analyst in fiscal affairs, Justin Bogie, to explain whether these were savings or cuts. Turns out, they aren’t really either:

The Republicans proposed offsets of $750 million on the $1.1 billion emergency bill. According to the Congressional Budget Office, the reality is that only about $127 million of that is real savings and the other $623 million would have never been spent anyway. So by ‘saving’ $750 million they actually are spending an additional $623 million over what would have been spent from those accounts.

The truth is no new money is needed and Republicans were wrong to cave on that front. But compromise they did and it still wasn’t enough to get the Democrats to go along. And therein lies the hypocrisy.

Democrats have proven by their behavior this week that their true cause celebs are not fighting the Zika virus and protecting women’s health, but big spending and special interests like the abortion lobby.