Mattis Calls on Congress to Authorize Base Realignment and Closures 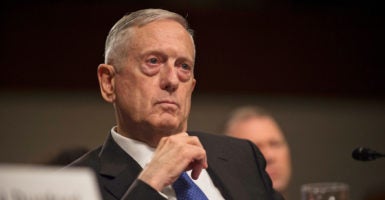 Defense Secretary James Mattis said he is confident that the Department of Defense has 19 percent excess in infrastructure. (Photo: Amber Smith/Zuma Press/Newscom)

Defense Secretary James Mattis sent a letter to Congress earlier this month calling for members to authorize a new round of base realignment and closures in the National Defense Authorization Act for 2018.

The bill is scheduled to be reconciled between the House and Senate next week.

Mattis’ letter addressed two important criticisms that members of Congress have used as excuses to not authorize a new round of BRAC: lack of a detailed justification, and a concern that the military used a small force structure to determine whether it had excess infrastructure.

As indicated by the letter and recent Heritage Foundation research, more complete data will only be available after the initial steps of the BRAC process, which must first be authorized by Congress.

Once this data is available, the secretary of defense has the discretion to certify the need for a new round.

This discretion to continue with the authorization of a new round of BRAC is one of multiple off-ramps that can terminate the process. This should assure lawmakers that the process will only go forward once the secretary has certified the need.

A recent Heritage report recommends that this data collection effort be transformed into a biennial report to Congress, creating reliable, recurring data. This type of data analysis would give more detailed assessments of how military installations are being utilized.

The Pentagon is currently caught in a Catch-22 situation. Before Congress will authorize BRAC, it is demanding detailed data on military infrastructure—but that’s something the Pentagon can only provide after Congress authorizes BRAC.

The force structure utilized in the Pentagon’s initial analysis of infrastructure capacity is larger than the one criticized by Congress, yet the findings are still compelling: There is a 19 percent excess of infrastructure, costing the Department of Defense billions of dollars to maintain on an annual basis.

The force structure used in this latest assessment is based on the 2012 force levels, before the Budget Control Act of 2011 and its sequestration-imposed caps began to reduce the size of the military.

This 2012 force structure is still below what The Heritage Foundation’s Index of U.S. Military Strength recommends. Nonetheless, Congress could require the Pentagon to use a larger force structure in its analysis, as a recent Senate amendment proposed.

Furthermore, since a BRAC round does not reduce all of the excess and maintains surge capacity, it can accommodate a larger force.

A new BRAC round would reduce a portion of this excess. Congress should have a goal for the reduction—this is recommended in recent Heritage research and should be a staple of any future BRAC round.

By creating a reduction goal, Congress can focus the Department of Defense toward meeting that target.

When Mattis testified in front of the House Armed Services Committee June 12, he was tepid in his support for BRAC. He stated that he was not comfortable with the 20 percent excess capacity number and wanted more time to look at the numbers.

Now, four months later, he has had a chance to study the situation, and has unequivocally stated that he is confident in the estimate that the Department of Defense has 19 percent excess capacity.

Additionally, Mattis has expressed that he will be personally engaged in the certification process to ensure that there is excess capacity.

As lawmakers from both chambers start the conference process for the 2018 National Defense Authorization Act, it would be great to heed Mattis’ recommendations and authorize a new round of BRAC to make better use of taxpayer dollars and to build military readiness.