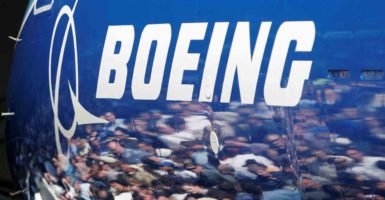 Rep. Peter Roskam today criticized Boeing for “putting their financial interest first and foremost before American security” after the company announced the sale of $25 billion worth of commercial aircraft to Iran.

The Illinois Republican’s remarks in an interview with The Daily Signal followed news that the aerospace giant employed and didn’t disclose its relationship with a respected former U.S. diplomat who supported the nuclear deal with Iran that paved the way for the sale.

The agreement between Boeing and Iran Air drew scorn from Roskam, one of the most vocal critics of the Iran nuclear deal. He questioned the judgment of Thomas Pickering, a former U.S. ambassador to Israel and the United Nations who has been on Boeing’s payroll for years.

“Boeing is being dismissive of the security concerns,” Roskam told The Daily Signal, adding:

Boeing is overcharacterizing their ability to make sure these [planes] don’t fall into the wrong hands, and Boeing is clearly putting their financial interest first and foremost before American security. That’s a very harsh thing to say. I’m disappointed to say it, but it’s true.

Earlier this week, Boeing confirmed it had signed the deal to sell $25 billion worth of planes to Iran Air, the country’s state-owned airline. The agreement marks the first time since the Islamic Revolution in 1979 that American aircraft have been sold to Tehran.

The sale was rumored to be in the works for some time, though Boeing declined to say whether it had been finalized as recently as last week.

News of the pending sale to Iran of more than 100 commercial airliners manufactured by Boeing prompted swift backlash from some lawmakers, with Roskam leading the opposition.

“It’s becoming increasingly clear that Iran Air was, in my opinion, taken off the terror watch list as part of the [nuclear] deal with the Iranians,” Roskam told The Daily Signal. “And it didn’t have anything to do with Iran Air changing its behavior. It was just simply a point of negotiation to open up and to induce them from coming to the table on the nuclear deal if they got access to airplanes.”

“We strongly oppose the potential sale of militarily-fungible products to terrorism’s central supplier,” the two Republicans wrote. “American companies should not be complicit in weaponizing the Iranian regime.”

Boeing responded to Roskam and Hensarling’s letter today, although Roskam characterized the company’s response as “underwhelming.” In the letter, Boeing said it intended to sell 80 commercial airliners to Iran and secure sale of another 29 to a third party, which would then lease the aircraft to Tehran.

Roskam said he finds it shocking that an American corporation would pursue business with Iran’s Islamic regime, which the State Department said is the “foremost state sponsor of terrorism.”

“I find it jarring that they’re that dismissive, that cavalier, and are making a strategic decision to become complicit in the world’s largest state sponsor of terror,” Roskam said of Boeing, continuing:

Remember, there has been no change in disposition on the part of the Iranians. The president of the United States, the national security adviser, the secretary of state have all agreed that money from sanctions relief was going to go to fund terror. How much more so would a fungible product be used to expedite, to strengthen, and to enlarge their capacity to export terror? It’s outrageous.

The Associated Press reported that the Obama administration sanctioned Iran Air exactly five years ago after the state-owned airline used passenger and cargo planes to fly rockets and missiles to Syria and other nations. The weapons sometimes were disguised as medicine or spare parts, AP reported.

The Obama administration dropped the economic sanctions against Iran last year as part of the multinational deal in which Tehran pledged not to pursue a nuclear weapon. On Tuesday, State Department spokesman John Kirby said the administration “welcomes” Boeing’s sale of jets to the Islamic regime.

“The State Department welcomes Boeing’s announcement of this deal with Iran Air, which involves the type of permissible business activity envisioned in the Joint Comprehensive Plan of Action,” Kirby told reporters, referring to the nuclear pact. “Boeing has been in close contact with the State Department regarding this deal.”

>>> What Lawmakers Can Still Do to Push Back on Iran Deal

“Instead of increasing pressure on Iran after the nuclear deal, as President Obama promised, the administration has become Tehran’s cheerleader,” Royce said in a statement to The Daily Signal.

Boeing’s announcement of the deal with Iran Air came just before The Daily Beast reported that the aerospace company employed  Pickering, a well-respected diplomat who had advocated completion of the Iran nuclear deal.

According to The Daily Beast, Pickering, a former U.S. ambassador to Israel and the United Nations, was on Boeing’s payroll at the same time he was meeting with members of Congress, testifying before congressional committees, writing letters to congressional leadership, and publishing op-eds for major news outlets voicing his support for the nuclear deal that cleared the way for Boeing to sell aircraft to the regime.

Pickering  told the news outlet he served as a consultant to Boeing from July 2006 to December 2015. However, he didn’t respond to its questions on whether he disclosed his relationship with Boeing while advocating the nuclear deal on Capitol Hill.

Roskam, when asked about Pickering’s involvement, questioned the actions of the former ambassador.

“If someone is presenting themselves as a neutral advocate, and yet you learn that they have a financial interest, it really draws into question both their judgment and their motivations,” Roskam told The Daily Signal.

“It’s sophisticated,” he said of Boeing’s ties to Pickering, as well as the corporation’s financial gain from implementation of the nuclear deal with Iran.