Inside the Legal Challenge to the FAA’s Drone Registry 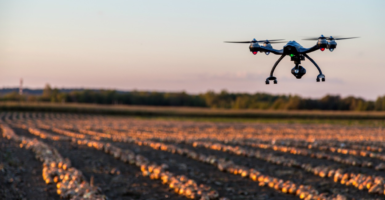 The FAA tried to pull the wool over the eyes of the American people by presenting a false narrative to justify the overregulation of drones. (Photo: iStock Photos)

Last December, the Federal Aviation Administration (FAA) rushed an arbitrary and ineffectual recreational drone-owners’ registry into effect, mere days before Christmas and just in time to criminalize the flying of toys by thousands of children and hobbyists. The agency has potentially roped those toys under its definition of “aircraft” for purposes of all aircraft regulation as well. Following this bureaucratic overreach, a hobby drone operator who happens to be a lawyer, John Taylor, filed suit in the Court of Appeals for the District of Columbia Circuit, challenging the registry.

Here are some of the highlights from Taylor’s brief in the case:

“For the first century of American aviation and beyond, the federal government made no attempt whatsoever to regulate recreational model aircraft.”

The FAA first wrote on the matter in 1981 in Advisory Circular 91-57, a guidance document calling for “voluntary compliance” with certain safety standards. In 2001, the FAA concluded that model aircraft fliers ought to comply with AC91-57, but that the FAA had no ability to enforce compliance because “Federal Aviation regulations do not apply to [model aircraft].” Model aircraft have historically and sensibly been considered categorically different from traditional manned aircraft. As Taylor put it, you might “use the word ‘train’ in defining a ‘model train,’ [but] it does not turn a model train into a train.”

“The FAA seeks to revise history when it argues its failure to register model aircraft, or otherwise treat them in any manner as ‘aircraft,’ in the past was the exercise of an ‘enforcement discretion.”

Since Oct. 2015, when the FAA first announced its intent to regulate recreational drones, the agency has attempted to erase from history its longstanding policy and now claims it has always considered model aircraft to be “aircraft” subject to federal aviation rules. Why? Because Congress, in 2012, barred the agency from promulgating any new rules governing recreational model aircraft activities—hence the claim that the rules now in force have always existed. Taylor sees this for what it is: an attempt to conceal “a direct and blatant violation of” federal law.

“Congress has adopted the FAA’s consistent interpretation that recreational model aircraft are neither ‘civil aircraft’ nor ‘public aircraft.’ As such they are not aircraft at all.”

This is the correct stance to take, because drones differ from manned aircraft in nearly every respect. What’s more, federal aviation laws and regulations are clearly written with manned aircraft in mind. For example, regulations require that an aircraft’s airworthiness certificate be displayed near the entrance to the cockpit and be legible to passengers and crew. The FAA has yet to clarify how it expects drone operators to comply given there are no cockpits, passengers, or crew. Meanwhile, federal aviation regulations include steep civil and criminal penalties for violations – for example, a possible 20 year prison sentence for shooting down an “aircraft” – that are clearly wildly disproportionate to drones. Nevertheless, the FAA insists these penalties apply.

“The FAA’s sudden re-characterization of any contrivance that flies as ‘aircraft,’ and thereby allowing it to shoehorn recreational model aircraft into aircraft regulations, places hobbyists in an untenable no-man’s land of compliance. The FAA has taken us down a rabbit hole of irrationality to achieve its goal of legally justifying registration.” (Emphasis added)

In addition to outrageous potential criminal and civil penalties, drone operators are now expected to comply with mutually exclusive directives from the FAA. For example, the agency demands that recreational drone owners swear an oath not to fly above 400 feet, yet by deeming drones to be “aircraft,” these operators are subject to federal regulations requiring them to fly above 500 feet at all times except during, for example, emergencies, or take-off and landing maneuvers. There is no way that drone fliers can comply with both rules simultaneously. Further, “the FAA’s broad new interpretation of the definition of ‘aircraft’ would similarly make Frisbees, paper airplanes, and other small flying toys subject to the myriad statutes and regulations applicable to ‘aircraft.’”

“People are entitled to a coherent and applicable definition of a term governed by such a massive and important body of federal regulation. It should not be subject to the FAA’s ever-changing whim.”

In its rush to regulate drones, the FAA created a regulatory scheme that is unconstitutionally vague and utterly irrational. Case in point: while the flight of any toy drone weighing more than 0.55 pounds is considered to be a threat to the safety of the national airspace requiring mandatory and criminally enforceable registration of drone operators, the pilot of an “ultralight aircraft, which can weigh up to 254lbs [and] carry a human” can fly without being registered.

“Simply put, the FAA’s rules regarding real aircraft, when applied to recreational model aircraft and other small flying devices, make no sense. The absurd and contradictory results in applying full-size aircraft regulations to these toys… show a lack of ‘consideration of the relevant factors’ and a ‘clear error of judgement.’”

The FAA has provided no rationale as to why it is reversing a century of non-regulation. Of course, a regulatory agency is not barred from changing its mind, but it must demonstrate a rational connection between the change in policy and the problem it purports to solve. Setting aside the fact that Congress has clearly spoken on the issue and curtailed the FAA’s authority in this space, there is no good reason for drones to be governed by regulations written for manned aircraft, making the policy arbitrary and capricious.

Last year, the FAA tried to pull the wool over the eyes of the American people by presenting a false narrative to justify the indefensible overcriminalization and over-regulation of drone hobbyists. John Taylor’s ongoing lawsuit will, with any luck, put the brakes on this instance of executive overreach.