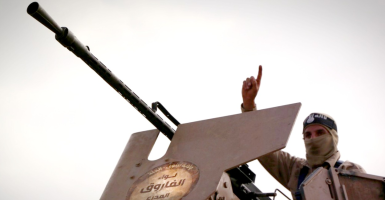 The Obama administration needs to abandon its position that we are winning this war. (Photo: Balkis Press / Sipa USA/Newscom)

No, President Barack Obama—we aren’t winning the war against the Islamic State.

The head of the CIA, John Brennan, testified on Thursday that, “Despite all our progress against [the Islamic State] on the battlefield and in the financial realm, our efforts have not reduced the group’s terrorism capacity and global reach.”

In fact, the Islamic State, also known as ISIS, is actively recruiting, training, and deploying operatives for future attacks in the west.

According to his remarks, “[ISIS] has a large cadre of western fighters who could potentially serve as operatives for attacks in the west … the group is probably exploring a variety of means for infiltrating operatives into the west, including refugee flows, smuggling routes, and legitimate methods of travel.”

So, ISIS has not been contained—or even deterred. This revelation really shouldn’t surprise us.

In the wake of Orlando, the U.S. needs to double down against ISIS both at home and abroad. Overseas, the U.S. should proactively double down and lead a multipronged global effort to deny ISIS territory, disrupt recruitment efforts, and uproot its destructive ideology.

At home, the U.S. should reform the counterterrorism enterprise by refocusing the Department of Homeland Security on intelligence capabilities and improving coordination between the DHS and other agencies.

For the sake of our safety and security, the Obama administration needs to abandon its position that we are winning this war and take a good look at the hard facts.