The Army Is Another Year Older, but Not Better 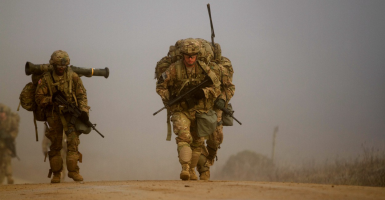 Unfortunately, today’s Army is getting significantly smaller and is struggling to accomplish the missions needed to keep America safe. Recently, Gen. Daniel B. Allyn, the second in command of the U.S. Army, spoke at The Heritage Foundation about the challenges facing today’s Army.

Soldiers are still on the ground in Afghanistan, are back in Iraq, and are in high demand in Europe. Can today’s Army meet these demands? The Army faces serious readiness challenges, with only one-third of Army brigades ready for combat and a rising aviation mishap rate.

Not only is the Army facing readiness challenges, it is also rapidly shrinking. At the end of the Cold War, the Army had 770,000 active duty soldiers, which shrunk to 481,000 by September 2001.

The Army was too small to handle the conflicts in Iraq and Afghanistan, so it added 90,000 soldiers. Due to budget cuts, the Army is now in the process of shrinking again. Just recently, the Army became smaller than it was on 9/11—with another 30,000 soldiers to cut over the next few years—all while threats continue to grow.

Unfortunately, size and readiness are not the only challenges facing the Army. As Allyn explained at Heritage, budget cuts have forced the Army to choose between readiness (training the troops and maintaining the equipment) and modernization (buying new equipment to improve capabilities).

The men and women in the U.S. Army are some of the best, brightest, and most honorable people in the world. But as a whole, the U.S. Army is shrinking and struggling. As Americans celebrate the Army’s 241 years of service, we should be concerned about the future of the Army as threats against America’s interests continue to grow. Instead of continuing to allow it to shrink, it is time to start growing the Army and investing the funds necessary to ensure that the Army is trained and equipped to protect our country.