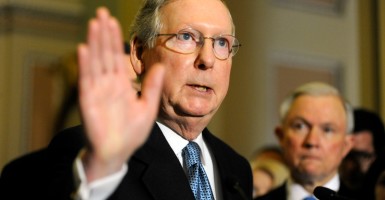 Top Senate Republicans doubled down on opposition to President Barack Obama’s recent Supreme Court nomination, meaning the next justice could be indirectly picked in the November election.

Senate Majority Leader Mitch McConnell, R-Ky., was adamant in opposition to the nomination of Merrick Garland, speaking Friday at the Road to Majority Conference, a gathering of conservative and faith-based activists in the District of Columbia.

“Let me say it clearly: Barack Obama will not get a Supreme Court justice in the 11th hour of his presidency,” McConnell said. “The president we are in the process of selecting will make this choice and will either turn the election in the right direction or the wrong direction, depending on the outcome of this November’s election.”

“We actually have two branches of government at stake in this election. The courts are at risk here too.”

Obama has framed Garland as a moderate jurist, but McConnell cited the National Rifle Association and the National Federation of Independent Business objections to his judicial record. Further, he pointed out that even The New York Times referred to Garland, the chief judge of the D.C. Circuit Court of Appeals, as a likely liberal.

“The New York Times speculates that [Garland] would tip the ideological balance to create the most liberal Supreme Court in 50 years,” McConnell said. “That’s why President Obama is trying to airdrop another Supreme Court justice on his way out the door. He thinks he can get away with it if his nominee is portrayed as a moderate. Let me tell you, President Obama calling someone a moderate does not make them a moderate.”

Obama nominated Garland in March to replace conservative Justice Antonin Scalia, who died earlier this year. However, Senate Republicans have blocked the nomination, saying that voters should make the decision in the next presidential election.

“We actually have two branches of government at stake in this election. The courts are at risk here too,” Sen. Jeff Sessions, R-Ala., a member of the Senate Judiciary Committee, said Friday at the Road to Majority Conference, sponsored by the Faith and Freedom Coalition.

Sessions quoted another Obama appointee, Justice Sonia Sotomayor, who previously said, there is “no objective stance, but a series of perspectives.”

Sessions asserted that such a mindset controlling the court would be very dangerous.

“You see, this is a postmodern, relativistic, secular mindset. I believe it is directly contrary to the founding of our republic,” Sessions said. “It’s the problem with the courts. Once they take that philosophy, they are no longer bound. … The battle we are engaged in here is to affirm there is objective truth.”

“It’s pretty hard for Republican senators to justify having a private conversation with Chief Judge Garland—by all accounts having those conversations go well—but yet refuse to convene a public hearing,” Earnest said. “After all, it is those Republican senators who have said that American voters should have a role in the process. Well, what better way could the American people have a role in the process than to give the American people the opportunity to hear directly from Chief Judge Garland himself.”