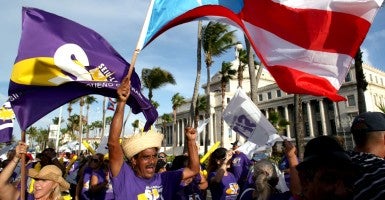 Stripping Puerto Rican creditors of their rights to access the courts through a stay on litigation would engender, not prevent, chaos. (Photo: Alvin Baez/Reuters/Newscom)

The rule of law requires an orderly and predictable judicial system that guarantees citizens the right to seek redress through the courts for wrongs they suffer.

Congress’s proposal to address Puerto Rico’s economic and fiscal crisis through the Puerto Rico Oversight, Management, and Economic Security Act throws all that aside by implementing a stay on all creditor litigation until February 2017, or longer if requested by the new oversight board established to manage Puerto Rico’s finances and debt restructuring process.

The legal system normally encourages debtors to make payments on time and in full. When that’s not possible, the prospect of a lawsuit can get debtors to the negotiating table and encourage the greatest possible efforts at repayment.

That has happened already in Puerto Rico as the island has defaulted on debt payments three times over the past year. Take away the hammer of the courts, and the debtor, in this case the government of Puerto Rico, may have little incentive to repay creditors or come to the table to negotiate a repayment plan.

This would create an incredibly dangerous precedent for troubled state and local governments for whom the option of a stay outside bankruptcy would encourage further fiscal recklessness.

While a stay on litigation can sometimes be part of bankruptcy proceedings, the stay included in the bill is entirely unprecedented. It would be put in place before the oversight board is established and before any restructuring process begins, it would apply only to bondholders and not pensioners, and it is one-sided, meaning it does not prohibit the debtor—Puerto Rico—from spending down its assets in advance of a settlement.

This would create an incredibly dangerous precedent for troubled state and local governments for whom the option of a stay outside bankruptcy would encourage further fiscal recklessness.

While such an unprecedented stay on litigation is contrary to the rule of law and bad policy in virtually any circumstance, it’s particularly troublesome for Puerto Rico, whose government has proven inept, reckless, and corrupt.

That government must not be given the chance to sell off assets through sweetheart deals to friends or family, to siphon off funds for pension bonuses, or to funnel resources to favored constituents through government bureaucracies.

The fact that the bill itself tried to put Band-Aids over this self-inflected wound invites question about the real purpose of the stay and strengthens the case for allowing the judicial process to continue to play out under current law, at least until the oversight board is up and running.

The rule of law exists to establish order and discourage illegal actions. Stripping Puerto Rican creditors of their rights to access the courts through a stay on litigation would engender—not prevent—chaos, recklessness, and injustice.