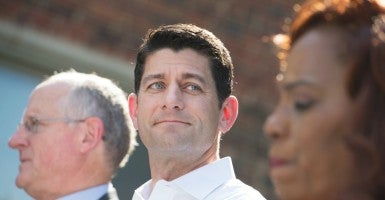 Twenty years after the welfare reform of 1996, House leadership is once again turning attention to policy for fighting poverty.

Reforming the massive welfare system, which includes 80 programs at a cost of $1 trillion annually, must be a top policy priority for conservatives in Congress. The 1996 reform and policy lessons since show how to overcome dependence and promote greater self-sufficiency.

While the anti-poverty plan released by House Speaker Paul Ryan, R-Wis., lauds the two-decade old reform, it fails to apply its lessons today. A serious conservative strategy for real welfare reform must:

But Ryan’s white paper does only one of these things (work requirements), and it does that only part way. While the emphasis on work requirements is to be commended, much more is needed.

Conservatives in Congress who seek to advance a robust welfare reform agenda should stand on these policies:

Most current means-tested welfare programs undermine work. By contrast, strong work requirements were the central feature of the 1996 reform, known as Temporary Assistance to Needy Families.

Over the years, these work requirements have been undermined and are today quite lax. In the average state, more than half of work-capable recipients are completely idle.

Temporary Assistance to Needy Families work requirements should be strengthened to require that two-thirds of nonemployed recipients engage in training, perform community service, or at least search for a job under supervision in exchange for their benefits.

Food stamps should be similarly reformed. States like Maine and Kansas have experienced dramatic reductions in their caseloads of able-bodied adults without dependents after requiring work. Food stamp’s work requirement should also be extended nationwide to able-bodied parents on food stamps. Able-bodied, nonelderly parents who have received food stamp benefits for over three months and who are not currently employed should be required to undertake training, community service, or at least a supervised job search in exchange for benefits.

Reps. Jim Jordan, R-Ohio, and Mark Meadows, R-N.C., with leadership in the Senate from Sen. Mike Lee, R-Utah, have introduced legislation that embodies these principles.

The Welfare Reform and Upward Mobility Act (H.R.5360) would strengthen Temporary Assistance to Needy Families work requirements and institute serious food stamp work requirements for able-bodied adults. This policy must be the centerpiece of any conservative welfare reform proposal.

Developing sound welfare policy requires accurate information. Current government surveys exaggerate poverty and inequality because they dramatically undercount welfare benefits and actual earnings. Out of the $1 trillion in government welfare spending, only about 5 percent is counted as income for purposes of measuring poverty or inequality.

Out of the $1 trillion in government welfare spending, only about 5 percent is counted as income for purposes of measuring poverty or inequality.

In reality, government simply does not know where much of its welfare spending is going. To obtain accurate information on the welfare state, reports of welfare use in annual Census surveys should be corroborated at the individual level by administrative records from programs such as food stamps, public housing, the earned income tax credit, Medicaid, and the State Children’s Health Insurance Program.

There is a strong consensus that welfare programs should not penalize marriage, and the Ryan anti-poverty plan concurs but does not provide policy to do so.

There are $22 billion in fraudulent and erroneous cash payments in the earned income tax credit and additional child tax credit welfare programs. Nearly all of this waste can be eliminated by requiring incomes and identities to be verified before cash payments are made and by limiting eligibility to adults with legal custody of a child.

Though somewhat more pro-work at low-income ranges than other welfare programs, the work incentives of the earned income tax credit are hampered because the value of the credit is not linked to actual hours worked.

A parent who works all year at $10 per hour gets the same credit as a parent who works for half a year at $20 per hour. The earned income tax credit benefit scales should be adjusted so that their value increases as the number of hours worked increases, while not increasing overall spending on the program.

Most low-income families receive benefits from multiple welfare programs. When these benefits are stacked on top of each other, the cost of the total benefit package can be excessive. For example, a single mother with two school-aged children who worked full time at the federal minimum wage through the year would receive $13,853 in post-tax earnings. However, this mother would, in most cases, also receive an additional $23,394 in cash, food, and medical benefits.

The total value of post-tax earnings plus benefits would come to $37,247, more than twice the federal poverty level for a family of three.

If the mother also receives housing vouchers, combined earnings, and welfare, benefits can reach $46,967 per year. This computes to an effective hourly wage rate of $22.58 per hour. Excessive benefits should be reduced by limiting the number of benefits recipients can piggy back on top of each other.

In particular, recipients who get an expensive housing voucher should not also receive cash aid from the earned income tax credit and the additional child tax credit.

Illegal immigrants receive over $4 billion per year in cash welfare payments from the additional child tax credit program. This abuse should be stopped by requiring recipients to have lawful Social Security numbers to receive aid.

In addition, government should not grant amnesty or “earned citizenship” to illegal immigrants; such action would give illegal immigrants access to over 80 federal welfare programs, greatly expanding welfare spending and dependence.

8. Convert the Social Services Block Grant to a Pay-for-Outcome Program

The Ryan plan speaks for the principle of paying for outcomes but seems to envision this as a new layer of spending added on top of existing spending. Instead, existing spending on programs like the Social Services Block Grant should be submitted to this test.

The Ryan plan argues that states should have more “flexibility” in spending. The federal government pays nearly 90 percent of the costs of cash, food, and housing programs. Federalism does not mean collecting hundreds of billions in taxes at the federal level and dumping the money on state bureaucracies to spend as they will.

Real federalism requires state governments to contribute more of their own resources to state-directed welfare programs.

This is the approach that the bill introduced by Jordan and Meadows takes with public housing, with the federal government gradually receding from the function over a decade, allowing states to be responsible for funding and administering housing assistance.

States will always spend their own money more wisely than they spend federal funds.

We know what works in fighting poverty and reforming welfare. But the task force report released today does not effectively pave the way toward successful reforms.

If this effort is going to gain momentum to make a real difference for the poor, conservatives must press for the policies outlined above.