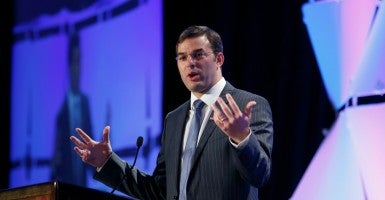 Two weeks ago 42 Republicans voted to endorse President Barack Obama’s transgender agenda. They did it by voting for the Maloney amendment, which affirmed Obama’s 2014 executive order barring “discrimination” on the basis of “sexual orientation and gender identity” in the private employment policies of federal contractors.

Over the weekend, Rep. Justin Amash, R-Mich., posted a characteristically thoughtful Facebook post defending his vote for the Maloney amendment.

The overarching policy concern is whether the government should elevate “sexual orientation and gender identity” for special legal privileges, especially in terms of laws barring “discrimination.”

Although Amash states his belief that “nondiscrimination laws generally do more harm than good” he does not offer a defense of why sexual orientation and gender identity should receive such treatment.

The appropriate response to Obama’s executive order, as I argued two years ago, is for Congress to reject the order, not endorse it in law.

In 2015 and 2016, the Obama administration expanded “sexual orientation and gender identity” policies to apply to other agencies and organizations—most recently with the departments of Education and Justice applying them to schools.

Amash says he disagrees with this most recent action because “The Constitution does not grant the federal government authority over schools.” We are in agreement on this point, but there is both a procedural question and a substantive question: Who should make these policies and what should the policies be?

Amash states that “the executive orders and the Maloney amendment do not say anything about pronouns or restrooms.” While technically true—they do not explicitly mention pronouns or restrooms—that the wrong employment policy on these issues can count as “discrimination” on the basis of “gender identity” is obvious.

As I pointed out in an earlier Daily Signal article, “discrimination” on the basis of “gender identity” can be something as simple as having a bathroom policy based on biological sex, not gender identity.

New York City is now fining people up to $250,000 for “gender identity” “discrimination” if they use the wrong pronoun and the Chicago public school district just adopted similar pronoun rules.

The administration has already issued guidance through the Occupational Safety and Health Administration saying workplaces should provide bathroom access based on a person’s self-selected gender identity and issued similar “guidance” under Title IX requiring unfettered access to school showers, lockers, and bathrooms based on gender identity.

Perhaps most disconcerting is Amash’s meager view of religious freedom for those who participate in government programs. Amash writes that “Congress can and should pass additional religious liberty protections for activities that are not within the scope of taxpayer-funded government directives.” And he continues that “Religious liberty cannot be used as a metric to judge the federal government’s policies with respect to contractors and grantees in the performance of services on behalf of the government using taxpayer funds.”

It is unclear what exactly Amash means by this, since it is a long-standing practice of the federal government that citizens do not give up their religious freedom simply because the government asks them to serve the public through a contract or grant.

In 2007, for example, the Office of Legal Counsel clarified that the Christian relief organization World Vision was protected by the Religious Freedom Restoration Act in terms of its employment practices, even though it receives government grants. This is good public policy that should be defended.

Indeed, in our current situation, where the government over taxes citizens and then selectively returns some of that money to citizens and their organizations, we should insist that these organizations—as far as reasonably possible—be able to operate according to their own convictions.

Amash’s contention that religious liberty “cannot be used as a metric” when taxpayer money is involved, and should not receive additional protections if “within the scope of taxpayer-funded government directives” could have significant implications for school choice programs and other civil society solutions to social needs.

Which, again, raises the fundamental policy question: Should “sexual orientation and gender identity” receive special privileges in law? The answer is no.

Citizens should not be discriminated against in grants and contracts simply because they believe that we’re created male and female, and that male and female are created for each other. Acting on these beliefs, of course, is precisely what can count as “discrimination” under Maloney and the Obama executive order.

Amash ultimately defended his vote in support of Obama’s executive order in terms of “whether that executive order makes the system better or worse, more or less consistent with the rule of law.” But the rule of law depends on consistency and clarity, not ambiguous, undefined, and ever shifting terms such as “sexual orientation and gender identity.”

Private businesses that do contract work for the government now have to be careful should they use the wrong pronoun in addressing an employee or should they continue bathroom policies that reflect biology.

Unless lawmakers can tell employers what does and does not count as “discrimination” on the basis of “gender identity,” the rule of law suffers.