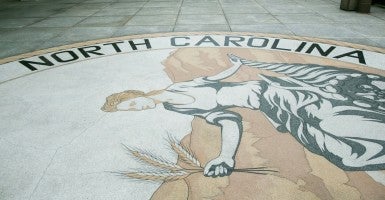 "The injunction order is final in that it’s the order that will last for the remainder of the case about the policy," said ADF lawyer Tyson Langhofer. (Photo: Al Drago/CQ Roll Call/Newscom)

North Carolina State University infringed on the free speech rights of a student-led Christian group, a federal judge has ruled.

“The judge pretty much granted the entire request that we asked for,” a lawyer for the students, Tyson Langhofer, told The Daily Signal.  “Essentially, everything in the final order that we requested was granted.”

The group Grace Christian Life, which meets on the NC State campus, sued school administrators on April 26 for requiring they obtain a permit before holding a meeting for fellow students in Talley Student Union.

In a statement provided to The Daily Signal, NC State said:

NC State appreciates the court’s review of this matter, and we will follow the court’s preliminary ruling. The university remains an environment that fosters and enables the healthy and free exchange of ideas and viewpoints by our students and academic community. The ruling is not in response to a concern over the university’s actual application of the policy, which is content neutral.

The judge’s order will not prohibit university officials from regulating student speech or behavior that is disruptive to campus activities, violates school policies, or interferes with the learning of others, Langhofer told The Daily Signal. He said:

Any kind of speech that would interrupt or interfere with the university’s educational activities or that would potentially prohibit or disrupt or block traffic, they can ask you to stop that.  Any other speech that doesn’t disrupt otherwise, you don’t have to have a permit to engage in that. … The injunction order is final in that it’s the order that will last for the remainder of the case about the policy.

Langhofer is a senior counsel at Alliance Defending Freedom, a Christian legal aid group that represents people who have reason to think their religious liberties have been compromised.

NC State has the option to appeal, but Langhofer said that is “unlikely.”

“It means that now, students at NC State have the ability to speak freely to one another without having to obtain a permit first,” he said of the ruling. “It means they can fully exercise their First Amendment rights.”