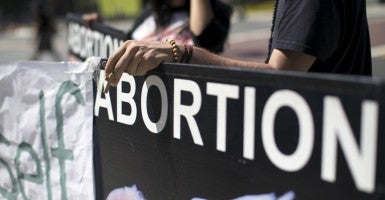 A new round of documents raises questions about StemExpress profiting off the sale of body parts, organs, and other tissue from aborted babies. (Photo: Mario Anzuoni/Reuters/Newscom)

Republicans on a special House panel investigating the market for fetal tissue released new documents that they said show the procurement company StemExpress marked up the price for body parts, organs, and other tissue from aborted babies 400 to 600 percent when selling the samples to researchers.

One example of such markups of four to six times cost is seven brains sold by StemExpress to Yale University School of Medicine for $715 each, according to the documents.

“There’s a business contract between StemExpress and the abortion clinics under which both sides make a profit from the baby body parts inside the young woman’s womb,” Blackburn said in a prepared statement, adding:

The contract changes the way both entities view the young woman: Her baby is now a profit center. This betrayal of a young woman’s trust should disgust us all. It takes financial advantage, obtains consent through coercion, and deceives the woman, all in violation of federal privacy laws. HIPPA is a federal law that gives patients the right to determine where and when their private medical information is disclosed. This includes personally identifiable information such as name, age, and Social Security number, along with any present, future, or past health data.

In her letters, addressed to two officials at the Department of Health and Human Services, Blackburn said several abortion clinics provided StemExpress—which is not covered by HIPPA—with personally identifiable information so that StemExpress could fulfill orders from researchers for tissue from aborted babies.

In a statement to The Daily Signal, a spokesman for StemExpress said the tissue procurement company is “confident there has been no violation of law and appropriate consents were made for every fetal tissue donation,” adding:

We welcome the opportunity to answer any questions from the U.S. Department of Health and Human Services or any other agency related to Representative Blackburn’s continued unfounded accusations. StemExpress will continue to support lifesaving research.

The Daily Signal sought comment from the organizations, which did not respond to phone calls before publication of this article.

Rep. Marsha Blackburn, R-Tenn., points to evidence that abortion clinics and procurement companies may be profiting from the transfer of fetal tissue. (Photo: Jay Mallin/ZumaPress/Newscom)

Blackburn’s letters, first reported by Fox News, ask the Department of Health and Human Services to investigate potential violations of HIPAA and federal regulations pertaining to the fetal tissue market. The letters are addressed to Jocelyn Samuels, director of the Office of Civil Rights, and Jerry Menikoff, director of the Office for Human Research Protections.

In her letters, Blackburn said the Department of Health and Human Services maintains the right to impose civil money penalties on covered entities, such as Planned Parenthood, that fail to comply with the privacy rule.

In addition, Blackburn wrote, “both a covered entity that discloses, and any person who knowingly obtains, [protected health information] in violation of [HIPAA] can face criminal fines or imprisonment.”

Evidence of the House panel’s allegations included StemExpress documents that feature compensation rates for tissue and blood procurement. Effective Jan. 1, 2013, StemExpress paid procurement technicians $10 per hour, plus what the company calls a tissue or blood bonus ranging anywhere from $10 to $75 per specimen. “StemExpress paid the abortion clinic for each fetal tissue and each blood sample and then marked up the tissue four to six hundred percent for sale to the researcher,” Blackburn wrote.

In one case, in January 2012, StemExpress billed $5,175 to Yale University School of Medicine for seven brains priced at $715 each. The total included two charges of $85 for Fedex priority overnight shipping.

The $715 price per brain, Blackburn’s letter implies, would include the markup of 400 to 600 percent. According to the StemExpress compensation policy, procurement technicians get a $35 bonus for procuring anywhere from one to 10 fetal brains in addition to their $10 hourly rate.

While transportation costs were included in the documents released by Blackburn’s panel, investigators are seeking to obtain accounting records from StemExpress to further clarify the price discrepancy between the procurement technician’s compensation rates and the total amount billed to research institutions such as Yale.

The Daily Signal sought comment from Yale via email, but has not received a response.

The National Institutes of Health Revitalization Act of 1993 prohibits any person or organization from profiting from the sale of fetal tissue. However, it is legal to provide payment and accept payment to cover reasonable costs for “transportation, implantation, processing, preservation, quality control, or storage of human fetal tissue.”

Lawmakers and pro-life activists raised questions about whether abortion clinics and middleman procurement companies such as StemExpress profit from transactions involving organs, body parts, and other tissue from aborted babies after the Center for Medical Progress released a series of undercover videos last year.

The hidden-camera videos, produced by the center’s David Daleiden, showed officials at Planned Parenthood affiliates discussing the buying and selling of baby body parts and other tissue, raising questions about whether abortion clinics and middlemen companies are profiting off these transactions.

Planned Parenthood Federation of America consistently has denied any wrongdoing and was cleared in multiple state investigations so far. In October, after facing questions about its tissue donation practices, Planned Parenthood announced it no longer would accept any reimbursement.