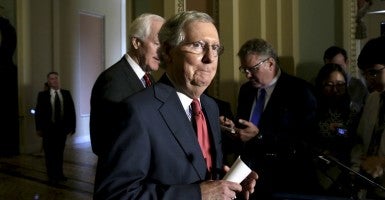 Welcome to what leadership looks like in Washington in the year 2016. (Photo: Yuri Gripas/Reuters/Newscom)

Senate Majority Leader Mitch McConnell, R-Ky., has apparently given up on another battle front: Stopping America’s young women from being forced into military combat.

That isn’t exactly what he said this week when asked his views on whether women should be made to register for the draft, but it’s the logical outcome of his position.  The question arose because the National Defense Authorization Act, likely to come to the Senate floor next week, contains language to draft women.

Here is what McConnell said, according to the New York Times:

First of all, I don’t anticipate going back to the draft. The professional voluntary Army has been very successful. We’re talking here about registration for Selective Service, should we ever go back to a draft. And given where we are today, with women in the military performing virtually all kinds of functions, I personally think it would be appropriate for them to register just like men do.

That is a very good example of a politician trying to have it both ways—kind of a “I’m for something because it won’t happen but if it does happen I support it.”

Welcome to what leadership looks like in Washington in the year 2016.

In reality, the debate over the draft is an outcome of a larger debate we never had—whether America’s daughters should be forced into military combat.

As McConnell himself admitted, it’s because all roles in the military, including combat, are now open to women that it only seems fair to force women to be part of any future draft.

The debate over whether women in combat is good for them, for the military, or for society at large never occurred because that would have meant taking on the Obama administration. And as anyone who has followed past political skirmishes between GOP congressional leadership and the Obama White House might predict, this was another hill the GOP just wasn’t willing to charge.

Late last year, the Obama administration handed down another “we know better than anyone else, including experts” mandate declaring all military combat positions must be open to women.

Late last year, the Obama administration handed down another “we know better than anyone else, including experts” mandate declaring all military combat positions must be open to women.

This was done despite studies conducted by branches of our own military that raised serious red flags about the performance of co-ed units. And oh, the American people had had no say, either.

Yet it was done with little to no objection by Republicans in Congress.

This is what happens when social experiments, political agendas, and being scared of your own shadow becomes more important than standing up and doing what is best for the country.

The mission of our armed forces must be the standard for determining who plays what roles in them.

And evidence evaluating the effectiveness of putting women in direct combat should not be ignored. A study conducted over 9 months in 2013 by the Marine Corps’ Gender Integration Force evaluated 134 ground combat tasks. The results? All-male units outperformed co-ed units in 69 percent of the tasks. Female training course completion rates lagged well behind men and the injury rate among women was much higher.

These realities drive up casualties and costs and they reduce our military’s effectiveness. That is not only a threat to women and men wearing our country’s uniform, but also a threat to all of us they are sworn to protect.

Congress should prohibit any measure that would force women to register for the draft and be forced into combat roles. You can’t be for one and not be for the other and lawmakers such as McConnell shouldn’t pretend otherwise. If you’re for women being drafted, you’re for women in combat.