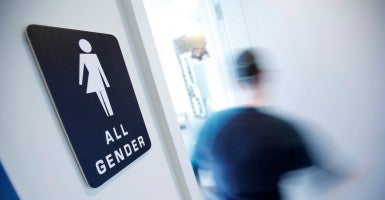 The left for years claimed that all it wanted was for LGBT persons to be left alone, but this was a lie. (Photo: Jonathan Drake/Reuters/Newscom)

Chicago Public Schools announced on Monday that students and staff must be granted unfettered access to intimate school facilities based on their chosen gender identity. Because both transgender and non-transgender students have valid interests at stake, accommodation with private facilities is the sensitive and sensible solution, but advocates on the left say that’s discrimination.

Put concretely, boys must now have the “right” to undress in the girls’ locker room before gym class so long as they say they identify more with girls and would feel more comfortable doing so. This latest front in the bathroom wars proves that same-sex marriage was merely the start, not end, of the left’s LGBT agenda.

Of course, when Title IX was passed in 1972, “sex” referred then to what it still refers to now: the basic biological reality of being male or female. Nevertheless, having made their discovery to the contrary (over 40 years after the law was passed), the administration went around the country threatening schools with revocation of millions in educational funds if they did not allow kids unfettered access to the locker room of their choice.

In a weak acknowledgement of the uproar this will cause, Chicago Public Schools says students that are not gender confused “should” be allowed access to alternative facilities. So, for example, if there are 50 girls who object to a boy undressing in front of them, it is the 50 girls, not the boy, who must go change in “single stall restrooms” elsewhere. Of course, the odds are high that school officials on the lookout for any sign of “bullying” will take careful note of which students leave the locker rooms, presuming they are allowed to leave at all.

To add to the confusion, the definition of gender identity changes about every three months, so the rules we are supposed to live by are constantly moving. But the latest definition, according to Chicago Public Schools, is that sex is merely “a label a person is assigned at birth” and that the reality lies in one’s internal “psychological knowledge” of their own gender “regardless of the[ir] biological sex.”

This includes “male/man/boy, female/woman/girl, trans/transgender, gender variant, gender nonconforming, agender, gender non-binary, or any combination of these terms.” Whatever bureaucrat or committee wrote this definition felt compelled to add that gender nonconforming also covers “gender expansive, gender variant, or gender creative,” apparently to cover all the bases, except they may have missed some because the latest count, according to the left and some corporations, is 60 possible gender identities.

Under this definition, the only possible way we can know a person’s gender identity is by asking them, and if they consistently answer the same thing, bingo, that’s their gender identity. Transgender students deserve to be treated with respect, but if Chicago Public Schools or the Department of Justice simply required provision of private facilities for the minuscule number of students who are not comfortable changing in front of people of their own sex, there would not be a national debate over bathrooms.

Except they require that if a boy says he is a girl, he must be treated exactly like a girl in every respect, otherwise it is psychologically traumatic and illegal discrimination. This means that portions of sex education classes reserved just for girls (so they can speak with less trepidation about sensitive topics, like menstruation) must include every boy that self-identifies as a girl.

And therein lies the biggest affront from these new policies. Not only must government employees play along with a gender confused child’s subjective wishes, so must every other student, even though the large majority of children with gender identity issues grow out of them. In fact, Chicago Public Schools specifies that students must address children by whatever pronoun they wish, be it “they, their, ze, he and she.” Failure to do so “will result in appropriate consequences for offending staff and students,” in other words, discipline up to and including expulsion from school.

The left for years claimed that all it wanted was for LGBT persons to be left alone, but this was a lie. It is now clear that liberals and their enablers will not leave anyone alone and will use the full force of courts, lawsuits, and government to ensure any resistance to their new gender ideology “will result in appropriate consequences.”