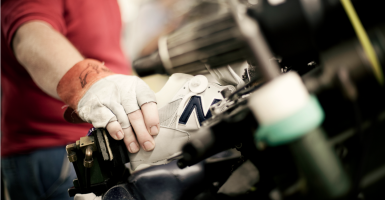 New Balance Athletic Shoes, which manufactures some of its shoes in the United States, has recently been pushing Congress for a “Made in the USA” sneaker mandate for new military recruits.

Reps. Bruce Poliquin, R-Maine, and Niki Tsongas, D-Mass., (who just happen to represent states where New Balance factories are located) eagerly are behind the mandate.

According to a New Balance spokesman, “Congresswoman Tsongas has been a champion for U.S. manufacturing throughout the course of her career and we are grateful for her and Poliquin’s support of the domestic footwear industry.”

The shoe mandate was attached to the National Defense Authorization Act by amendment and passed the House Armed Services Committee unanimously as a part of a larger amendment package. The larger defense bill is expected to be considered by the House of Representatives in mid-May. A New Balance executive said, “I’m incredibly confident this is going to pass the House.”

Currently, new recruits for the Air Force, Army, and Navy receive an allowance they can use to buy athletic shoes. This “Made in the USA” mandate would give New Balance a substantial financial windfall, since new recruits could no longer use their allowances to buy from Nike, Asics, Adidas, or other competitors.

Of the different types of shoes New Balance offers, only three would be available to new recruits.

It’s easy to see why many in the Department of Defense oppose the idea. In 2014, the Army Times posed the following question on Facebook:

These New Balance kicks are 100 percent made in America. Should DoD start issuing them to recruits?

Most of the 830 replies were highly critical. Typical responses included:

Inside the Dealmaking Process

The legislative campaign behind this mandate highlights what the debate over free trade vs. protectionism is all about.

The company’s executives thought they had been offered a sweetheart deal from the Obama administration related to the Trans-Pacific Partnership agreement. New Balance said the administration promised to mandate the use of U.S.-made shoes for new recruits, as long as the company agreed not to oppose partnership.

But things didn’t go as planned. The Boston Globe reported: “The problem, according to the Department of Defense, is that none of the three New Balance shoes offered for consideration met the agency’s cost requirements and one didn’t meet durability standards.”

That apparently caught New Balance by surprise. Once its shoes were rejected by the Department of Defense, New Balance announced its opposition to the Trans-Pacific Partnership.

New Balance also decided to attempt an end-around the Defense Department by asking Congress to mandate the use of 100 percent U.S.-made shoes for new recruits upon entrance to basic training, except in cases of medical necessity.

That summarizes the debate about free trade vs. protectionism in a nutshell. Americans win when companies compete for their business in the marketplace, instead of on Capitol Hill.