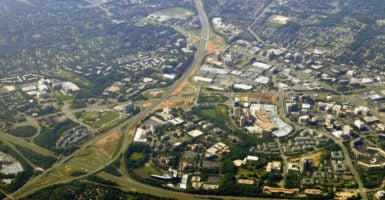 Fairfax County, Virginia, is in the top five counties with the wealthiest households, as measured by median income. (Photo: Phototreat/Getty Images)

The five jurisdictions with the highest median income are all suburbs of the nation’s capital, according to numbers released by the United States Census Bureau Thursday.

The rankings are a result of a five-year study called the 2013-2017 American Community Survey and measured over 40 features, including housing, demographics, as well as health insurance rates and education levels.

According to the study’s findings, the Washington, D.C., area seems to promote some of the healthiest counties in the country. The Census Bureau found that Howard County in Maryland and Loudoun, Fairfax, and Arlington counties as well as the city of Falls Church in Virginia are the top five jurisdictions with the wealthiest households, as measured by median income.

“The American Community Survey provides detailed profiles of communities nationwide. The ACS is an ongoing survey that offers vital information on a yearly basis about our nation and its people,” Victoria Velkoff, associate director for demographic programs, said in a press release. “It’s our country’s largest source of small area estimates for socio-economic and demographic characteristics. Information from the survey generates data that help determine how more than $675 billion in federal and state funds are distributed each year.”

The study also found that from 2013 to 2017, median household income increased in 16.6 percent of all the counties included in the analysis, while it decreased in 7.1 percent of counties, when compared to estimates from 2008 to 2012.

This report has been corrected to specify that Howard County is in Maryland.