Our Next President Must Stand Up to Putin 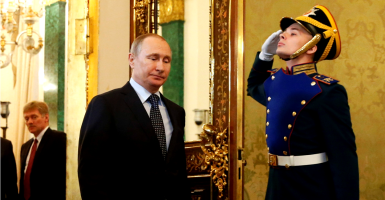 The U.S. must approach relations with Russia from a position of strength. (Photo: Maxim Shemetov/Reuters/Newscom)

Whoever takes over the White House in 2017 will face an aggressive, revanchist Russia that is a threat to the United States and our allies. No amount of wishful thinking can obscure this fact. Russia’s 2014 annexation of Crimea and invasion of the Donbas region of Ukraine is just one example in a long list of recent aggressions and abuses that should dissuade any new administration from viewing Russia through rose colored glasses.

The U.S. must approach relations with Russia from a position of strength, reassure our allies, and implement a comprehensive strategy for dealing with Russia as it currently is. Here are three things the next president should keep in mind.

First, the next president cannot afford to find out the hard way that Russia under Vladimir Putin is inimical to U.S. interests. Instead, the next administration should take a cue from the previous two presidents.

As Heritage has noted:

In 2001, President George W. Bush ‘looked the man [Putin] in the eye … [and] found him to be very straight forward and trustworthy.’ By late 2008, after Russia’s attack on Georgia, Bush’s error was obvious. In 2009, the Obama administration launched its “reset” of relations with Russia. By 2015, after Russia’s attack on Ukraine, President Barack Obama’s error was also obvious. U.S. concessions did not improve U.S.–Russian relations; instead, they convinced the Russians that the U.S. was willing to accord Russia an equality of status and a regional role that Russia’s actual achievements did not merit.

Second, the nature of the Putin regime is driven principally by domestic considerations, namely survival of the regime. Putin’s Russia is a regime that combines a lack of respect for political, civil, and economic rights with a dysfunctional economy. Russia’s actions overseas are driven by the desire to be seen as a powerful nation on par with the U.S., and to feed a nationalist paranoia that emphasizes Putin as the protector of Russia and Russian nationals against the encroachment of enemies bent on its destruction. It is not a western invasion Putin fears, but the Russian people having too many western ideas and loosening his grip on power.

Finally, the next president should be wary of the impact of Russian propaganda. The Soviet Union successfully employed “useful idiots,” in the West, who propagated Soviet propaganda but were held in contempt by Soviet leaders. Today this trend is alive and well: consider the decision of the Green Members of the European Parliament to host and sponsor the premiere yesterday of a false and defamatory film on Sergei Magnitsky. Magnitsky was brutally murdered by agents of the Russian state for attempting to uncover the truth about a multi-million dollar fraud committed by Russian officials. The film’s efforts to charge Magnitsky with the fraud are intended to advance a Russian disinformation campaign against him. They are a classic case of blaming the victim, and an excellent example of the continued existence of useful idiots in the West.

Putin’s Russia is repressive, mendacious, and aggressive. The next president of the United States cannot afford to take years to rediscover the nature of the regime. Rather, it is imperative that the next president heed the lessons of the past, and begin to implement a comprehensive strategy for addressing Russia as it currently is, and not as they hoped it would be.