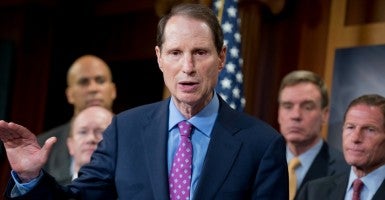 Sen. Ron Wyden, D-Ore., has released a plan to update the way businesses deduct the cost of capital expenses. Wyden is right to focus on capital cost recovery as a key way to improve the economy, but his plan does not go far enough to fix the problem because it focuses on administrative issues rather the flawed economic premise of current law.

Under current law, instead of allowing businesses to deduct the full cost of machinery, equipment, or other forms of capital when they buy those assets, the tax code requires businesses to deduct a portion of those expenses over many years—as long as 39 years in the case of buildings and factories. This is known as depreciation.

Stringing out the deduction of these expenses over many years raises their costs because of the time value of money. That higher cost reduces the amount of investment in the economy, which translates into a smaller economy and fewer jobs and lower wages for American workers.

The Tax Foundation found that the U.S. capital cost recovery system is much worse than most other developed countries in the Organization for Economic Cooperation and Development (OECD).

Efforts to reform the problems caused by depreciation should focus on reducing assets lives so business can deduct costs more quickly than under current law. The correct way to fully fix this problem is to allow businesses to deduct the full cost of capital at the time they make such purchases. This is known as expensing.

Under expensing, taxes would not artificially raise the cost of investment because there would be no delay in businesses’ ability to deduct those costs. Relative to the current system, investment would rise and the economy and American workers would benefit.

Wyden’s plan would not establish expensing, nor would it reduce asset lives. It would instead change the way businesses calculate their deductions each year by switching to a pooled basis system in place of the current Modified Accelerated Cost Recovery System (MACRS).

Wyden in his release requests comments about how to handle section 179 small business expensing. Were his plan to move forward, it should be amended to ensure that up to $1 million annually could be placed in a separate pool that allowed the entire investment to be expensed.

Wyden should be applauded for recognizing the antiquated cost recovery system needs updating. But Congress needs to make much stronger steps to fix the problem by establishing expensing.