This Legislation Will Curb the Power of Unaccountable Bureaucracy 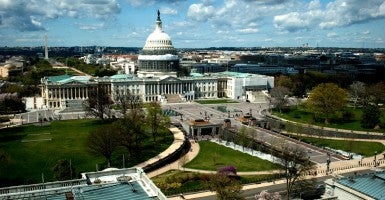 According to an upcoming Heritage study, the cost of Obama’s new rules alone is over $100 billion each year. (Photo: U.S. Capitol/Flickr)

The Constitution could not be clearer: “All legislative Powers herein granted shall be vested in a Congress of the United States, which shall consist of a Senate and House of Representatives.” However, it seems that someone forgot to tell federal regulators about that. Sen. Mike Lee, R-Utah, tried this week to change some of that this week, proposing to limit the Energy Department’s power to make rules without Congress’ consent.

Each year, regulators impose thousands of rules on the American people—over 20,000 during the Obama administration’s tenure alone. The cost is staggering: According to an upcoming Heritage study, the cost of Obama’s new rules alone is over $100 billion each year, and that only counts the biggest regulations.

The REINS (“Regulations From the Executive in Need of Scrutiny”) Act would implement just such a system, requiring congressional approval for the hundred or so “major” rules each year that cost $100 million or more. Yet, that bill—first introduced seven years ago—has been stalled in Congress. While approved by the House multiple times, it failed to gain any traction in the Senate.

Part of the reason for the stalemate is critics’ concerns over how the system would work in practice. That’s where Lee’s amendment comes in. He would impose REINS Act requirements solely on major rules from the Department of Energy.

This department certainly could use some scrutiny. Last year, the Department of Energy was responsible for six new major rules imposing new energy conservation standards on everything from ceiling fans to icemakers. The total cost: $1.6 billion each year for American consumers. And more is in store, with 10 more major rules on the agenda. Under the Lee amendment, each of these new rules would need explicit congressional approval to take effect.

The Lee approach provides a good toe in the water for broader implementation of REINS, providing a real life test of Congress’ ability to handle the expected new workload, and to identify any unexpected difficulties in implementation. It’s time for the Senate to take the reins, and this approach makes for an excellent start.