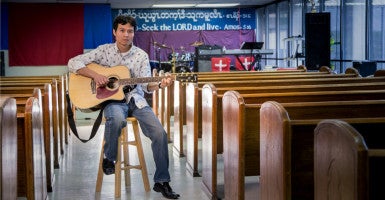 Eh Wah, a refugee from Myanmar who came to the U.S. in 1997, was driving through Muskogee, Okla., when the county sheriff's department pulled him over for driving with a broken taillight. (Photo: Institute for Justice)

A Texas man and his Burmese Christian band, who had $53,000 seized by law enforcement in Muskogee, Okla., in February will get their money back, the prosecutor said.

“[Eh] Wah had court this morning and following court, I looked at the cases and the evidence and talked with the officers involved and concluded that I would not meet my burden of proof in the civil or criminal case, and it required me to act and dismiss [the case] and return the money,” Loge told The Daily Signal.

Dan Alban, one of the lawyers with the Institute for Justice who represented Eh Wah, said in a statement Monday that Eh Wah’s experience with civil forfeiture indicates the broader need for reform.

“Muskogee has no excuse for this gross miscarriage of justice. Based on next to no evidence, what started as an ordinary traffic stop turned into a nightmare,” Alban said, adding:

They turned a man’s entire life upside down. It should have never come to this. This is a clear-cut case of abuse of power. Not every civil forfeiture victim is a Christian orphanage or a world-renowned Burmese Christian band, but when even their money isn’t safe, no one’s money is safe from forfeiture abuse. This case illustrates that civil forfeiture laws are fundamentally unjust.

Eh Wah, a refugee from Myanmar (formerly Burma) who resettled in Dallas in 1997, was traveling from Sioux Falls, S.D., to Dallas to see his family during a short break from a tour with Klo & Kweh Music Team, a band of Karen Christians.

The Karen people are an ethnic group in Myanmar, and many Karen refugees have resettled in the U.S.

Sheriff’s deputies with the Muskogee County Sheriff’s Department stopped Eh Wah for a broken taillight Feb. 27 and later discovered the musician was carrying more than $53,000 in cash—proceeds from the band’s concerts and donations it raised for  an orphanage in Thailand and a nonprofit Christian college in Myanmar.

The sheriff’s department seized the cash under Oklahoma’s civil asset forfeiture laws and argued Eh Wah was in “possession of drug proceeds,” according to an affidavit filed by law enforcement.

When sheriff’s deputies department searched the car, however, they didn’t find drugs or drug paraphernalia.

The Muskogee County District Attorney’s Office moved to forfeit the money in March, and Eh Wah, represented by the Arlington, Va.-based Institute for Justice, challenged the seizure. The public interest law firm said Eh Wah could prove the cash came from ticket and merchandise sales, as well as donations from Karen Christians to the school and orphanage.

Eh Wah’s story had been covered widely in the media before the DA’s decision to drop the forfeiture case and return the cash.

“I was pretty shocked and scared,” Eh Wah told The Daily Signal of the experience. “I never believed anything like this would happen to me. All I did was help people. I have all the proof with me, so this is pretty unbelievable.” “I was pretty shocked and scared,” Eh Wah says. (Photo: Institute for Justice)

The more than $53,000 in cash seized by the sheriff’s department came from money the Christian band collected during its shows and, according to the Institute for Justice, included:

The Muskogee County Sheriff’s Department did not respond to The Daily Signal’s request for comment.

After law enforcement discovered the cash in Eh Wah’s car and seized it, they brought the musician back to the sheriff’s station and questioned him for more than six hours.

Eh Wah says he told the sheriff’s deputies about the band and their nationwide tour. He explained why he had the money and where it came from, showed photos from concerts, and called the band’s leader, Saw Marvellous Soe, to vouch for him.

The sheriff’s department eventually released Eh Wah after midnight Feb. 28 without charging him with a crime. The department did, however, issue him a warning for the broken taillight.

“It’s pretty shocking and scary for me,” Eh Wah said. “It’s scary because of the way, growing up as a kid, you’re always taught to be a good kid. I always am trying to be a good kid my whole life. I never [drank] or smoked or anything. I’ve been accused and tried with things that I have no idea [of], and it’s pretty scary.”

The Muskogee County Sheriff’s Department seized the $53,000 under a civil forfeiture law, which allows law enforcement to seize cash and property suspected of being tied to a crime.

According to a November report by the Institute for Justice, Oklahoma has some of the worst civil forfeiture laws in the country.

For property owners who have had their things taken by law enforcement in the Sooner State, getting property returned is often an uphill battle. Claimants are forced to prove they had no knowledge their property was being used in a crime, and they often mount lengthy and expensive challenges in court.

Additionally, law enforcement agencies that forfeit property can keep up to 100 percent of the proceeds, which creates a perverse profit incentive for the police, according to the Institute for Justice.

Matt Miller, a lawyer with the organization who  along with Alban represented Eh Wah, told The Daily Signal:

Whenever you have bad incentives in place in any system, people find a way to take advantage of those incentives, and that’s exactly what’s happening with civil forfeiture.

State Sen. Kyle Loveless, R-Oklahoma City, tried to reform the state’s civil forfeiture laws earlier this year, making it harder for innocent people to get caught in the forfeiture machine.

His legislation, however, was met with fierce resistance from some of Oklahoma’s top law enforcement officials. In February, his civil forfeiture reform bill died in the Judiciary Committee after the chairman decided not to bring it up for a vote.

“That was a banner week for people’s property rights,” Loveless told The Daily Signal. “I don’t know how many more innocent people have to have their stuff taken before we take it seriously.”

Law enforcement often points to cases like Eh Wah’s as outliers, but Loveless said such reasoning doesn’t justify the taking of property from Americans who aren’t even charged with a crime.

“It should have never gotten this far, and I’m sure there has been legitimate drug proceeds and drugs caught, but you have to balance that with people who are still innocent and property that is still innocent,” the state senator said. “My heart goes out to these folks because they’re just trying to raise money for refugees and the Christian school. The system is obviously broken.”

More than five weeks after the Muskogee County Sheriff’s Department seized the $53,000 from Eh Wah’s car, the agency issued a warrant for his arrest for possession of drug proceeds.

According to an affidavit, Eh Wah “wrongfully … acquire[d] proceeds from drug activity.”

Though the sheriff’s department didn’t find drugs in his car, deputies cited the “positive alert” from the drug-sniffing dog as probable cause. They said Eh Wah gave “inconsistent” answers to questions and couldn’t confirm the money in his possession belonged to him.

The Institute for Justice also is fighting the criminal charge against the musician. On Monday, however, a judge denied a motion to quash the warrant for his arrest.

Regarding Oklahoma’s civil forfeiture laws, Miller said that under the current system, innocent people are likely to get entangled.

“The thing is when you have bad laws in place, then things like this inevitably happen,” Miller said, adding:

You’re going to end up taking money from orphans. That’s because [civil forfeiture laws] have incentivized police to focus on forfeiture revenues instead of criminals that are hurting people.

Eh Wah, meanwhile, said he hopes no one else has a similar experience.

“You’re trying to live your life being a good citizen, being the best for yourself or your community, and this shouldn’t be any law,” he said. “Hopefully, everything will be all right for me in the future, and in the future, something like this will never happen to anybody else.”

This article has been updated to include the statement from Institute for Justice lawyer Dan Alban and to clarify that sheriff’s deputies and not police officers seized Eh Wah’s cash.