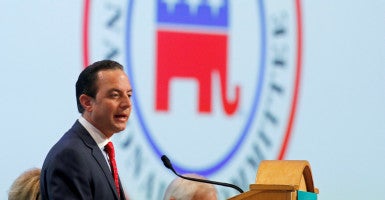 The Republican National Committee today adopted a resolution in support of reforming the nation’s criminal justice laws, in a significant sign of bipartisan consensus to undo mass incarceration in America.

In the one-page resolution, obtained by The Daily Signal, the RNC commends conservative-led states that have adopted policies to reduce their prison populations—such as Texas, Alabama, and Georgia—and urged Congress to act as well.

“This is the Republican Party coming together and saying criminal justice reform is an issue that needs to be addressed, and I think it’s sending a message that the RNC wants to make certain Congress has this as one of its top priorities,” said Telly Lovelace, the Republican National Committee’s director for urban media.

>>> After 15 Years in Prison, One Drug Offender’s Search for Meaning

The RNC’s official position supporting prison reform was one of 10 resolutions announced to committee members today during the national GOP organization’s spring meeting in Hollywood, Fla.

Other resolutions include one calling for sanctions against Iran’s ballistic missile program and another asking the Senate to wait until after the presidential election to consider a nominee for the vacant Supreme Court seat.

Each resolution is voted on by nine committee members, including RNC Chairman Reince Priebus.

Criminal justice reform is thought to be one of the few areas where Congress and President Barack Obama can work together to enact a substantive law during a contentious election year.

Both the Republican-led House and Senate judiciary committees have advanced legislation that would shorten prison sentences for low-level nonviolent drug offenders and allow well-behaved inmates to earn time off their prison terms.

But on the Senate side, some conservatives have argued that the Judiciary Committee’s proposal would allow violent felons the chance to be released from prison early.

The bill’s authors, including Judiciary Chairman Chuck Grassley, R-Iowa, Majority Whip John Cornyn, R-Texas, and Mike Lee, R-Utah, have fought that characterization. They recently made revisions to the legislation to satisfy critics.

Mark Holden, a top lawyer at Koch Industries, one of the biggest proponents of criminal justice reform on the conservative side, says he hopes the Republican National Committee’s resolution pushes skeptical conservatives in Congress to support the effort.

“The RNC position makes it clear that Republicans can and should continue to lead on this critically important issue as they have for the past several years,” Holden told The Daily Signal in an emailed statement, adding:

Hopefully, Republicans in the Senate and the House will follow the lead of Senators Grassley, Cornyn, Lee, Speaker [Paul] Ryan, Chairman [Bob] Goodlatte, and others, and pass comprehensive criminal justice reform at the federal level this year. The federal legislation is based on the same reforms that have worked so well in the states to reduce crime rates and safely reduce incarceration rates.

>>> After Obama Grants Clemency, a Federal Prisoner Rebuilds His Life

In its resolution, the RNC notes that the federal prison population, over which Congress has jurisdiction, increased 734 percent from 1980 to 2015, while taxpayer dollar spending on the prison system spiked 595 percent in that same period.

The resolution states that taxpayers “are not receiving the public safety return they deserve because lengthy prison terms increase recidivism rates for low-level offenders.”

In addition to supporting treatment options for drug addicts, and other policies to reduce the number of re-offenders, the RNC calls for “mens rea” reform. That would require prosecutors to prove that certain criminal suspects knowingly intended to break the law.

>>> How Overcrowding Forced Alabama to Confront Its Prison Problem